Tag Archives: how do i get more pickaxes

Halloween is back in Springfield!  Yes, the water is murky, the screen is slightly darker, monsters and minions are roaming our towns…is there anything better than Halloween in our pocket-sized towns?

One element introduced with this event is the Flanders Family Tome. A quick way to clear all tappables in Springfield with a twist! We’ve seen this a time or two with previous events, you’ll need to upgrade the Tome to unlock all of it’s benefits, but for those who are new around here (or those who have forgotten) let’s take a look at the how-tos for the Tome… 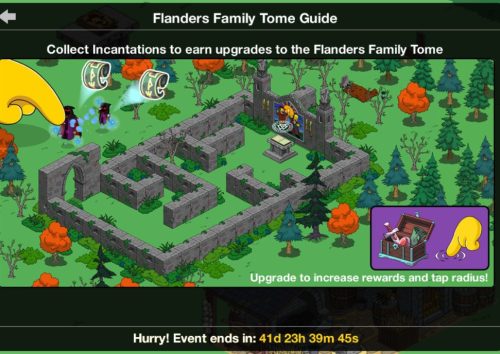 END_OF_DOCUMENT_TOKEN_TO_BE_REPLACED

Posted in Characters, Decorations, Tapped Out, Tips and Tricks, Updates

Halloween is back in Springfield!  Yes, the water is murky, the screen is slightly darker, monsters and minions are roaming our towns…is there anything better than Halloween in our pocket-sized towns?  (of course I would say Christmas, but Halloween is a close second to me lol)

We’re seeing a blast from the past in this event, with the return of the Dig Sites!  For Time Travel Toaster it was the excavation site, this time around it’s the Old Ruins Site.

As with the Excavation Game during TTT, the Old Ruins Dig Site has Tappers everywhere talking…about the best strategy, how many moves they can find the Relic in and apparently it’s very addictive.

So let’s breakdown the how-tos of this site & explore just what is the best dig strategy…. 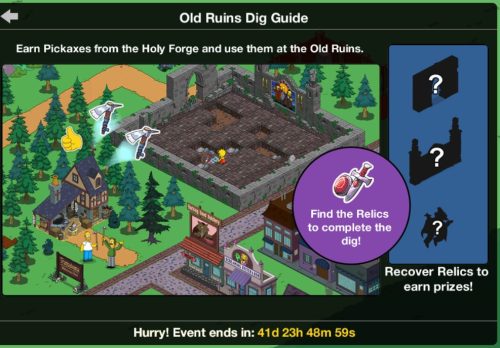 END_OF_DOCUMENT_TOKEN_TO_BE_REPLACED

Posted in Characters, Decorations, Tapped Out, Tips and Tricks, Updates

A very mini Whacking Day event has hit our games.  It’s basically just reselling Whacking Day items.  I’ll cover this a little later today after I get to the office. It’s nothing major, so don’t panic 🐍

The Wild West is alive and well in our Springfields!  As the Wild West Event has hit our games and it’s full of old west inspired decorations, buildings & characters!

This Event is broken up into 3 Acts, with each Act containing part of the story.  To help you move along with the event you’ll get several prizes per Act.  Each prize will either be something fun for Springfield or something to help you move along in the event.  For the Second Act you’re tasked with collecting Deputy Badges         (

is the Ordnance Express, because it’s about time Willie realized there was a gun store in town! 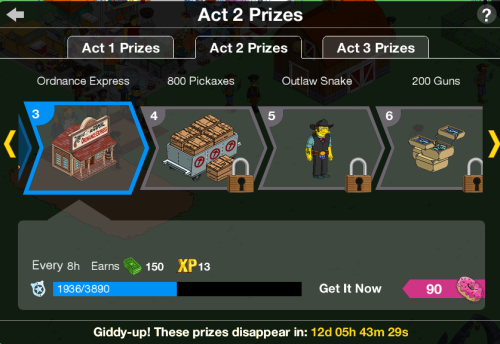