Where Did THAT Come From- WHALE

OOOOOOOOOh, EA gave us ANOTHER giant item for our Squidport. Yours getting a bit filled up now too? A Giant Whale!! Didn’t see that one coming, did you?

Whale now, I bet you are wondering why on earth did they stick this massive mammal into our game? Where did it come from? What does it have to do with the Simpsons? Well just sit tight, grab a nice cup of your favorite drink, snuggle up, and listen close as I tell a tall tale of a Whale.

So let us begin with the episode the Whale appears in, Season 21, Episode 19: The Squirt and the Whale.

Homer is tired of all the power being wasted in the home. He unplugs everything from all the outlets in the house. Lisa tells him that he can go to the Alternative Energy Expo and learn how to live with clean energy. He ends up buying a Windmill.

After he learns he is putting money back into the grid, he calls the power company and goes OFF the grid. He soon realizes though that without wind, the windmill just will not work. Bart ends up outside manually turning the blades so Lisa can watch TV. He makes a bargain with the “big guy in the sky” and a massive tornado hits. The wind is so strong it brings in a TON of electricity. It even blows out the Tire Fire…FINALLY…until lightning strikes and restarts it again. Lol.

The kids head out to see the damage the storm created. (Even Hitler is begging to , “MAKE IT STOP!! MAKE IT STOP!!” Guess he just couldn’t take the force blowing through anymore. Maybe I should toss him a carrot. Lol.)

Lisa is instantly saddened by the poor beautiful creature stranded on the beach. She even goes as far as naming her (as most kids do with any object) Bluella D’Whale. She goes around town and tries to get people to help her with the whale. The bullies don’t seem to care.

She runs home to ask Marge and Homer for help. Marge is concerned that this is not going to end “Whale” (see what I did there?) Homer figures this is a simple task. Just rolling it from the beach back into the ocean. Seems simple enough, right? Not like it is stuck in the bottom of a “Whale” (Ok ok…I’ll stop…for now) or a Mexican prison.

Homer gathers the town’s “strongest men” to roll the Whale back into the water. Doesn’t work.

So he decides they need to find the town’s smartest men to come up an idea. Yeah, I don’t think there is one among them. Lol.

Next up…OOOOOH BOATS!!!! They should have got the Knight boat or Mayflower to help out.

Lisa is becoming depressed as nothing is working to get the Whale back into the water.

Lisa tries to comfort the Whale by reading it some poetry by a night light. She falls fast asleep while reading to it.

She is awoken by Bart who is telling her they are getting the Whale off the beach. The W.H.A.L.E.S. Team is on the job. 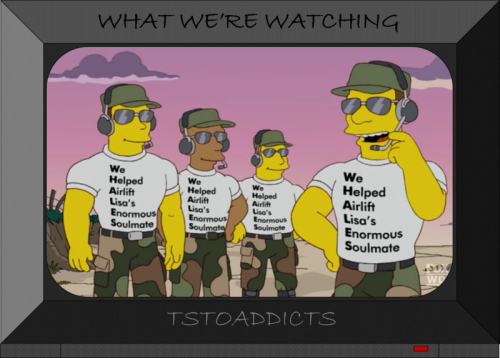 They airlift her into the ocean. Lisa is so happy.

She yells and waves goodbye to Bluella as the Whale plays, jumping in and out of the water…and…up to the SKY??!! HUH??!!!

OH, dream sequence. She awakens to find the Whale still there on the beach….DEAD??!!! Hey now. This is supposed to be a happy story, not one to make me cry. Poor Lisa is brought to tears. 😦

Homer attempts to comfort Lisa, but is of no use. She just wants to be left alone. The next day Bart and Milhouse make their way to the beach to poke the  dead Whale. They walk into the Police Force setting up explosives around the Whale. OHHHH MYYYY! This definitely will not end well.

When the smoke clears, the Whale was still there. o.O

Only half left. So where did the rest of it go?

Oh hey…it’s Lindsey Naegle. Is it bad I WANT a piece to hit her? 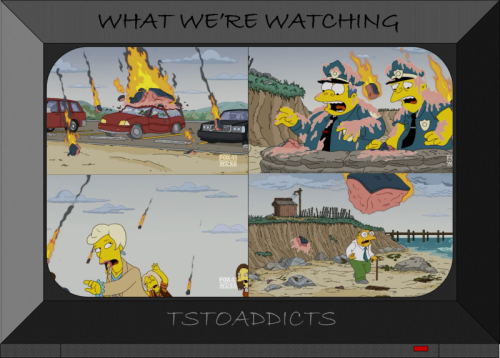 Of course a bit of it lands on the trigger and its all KABOOOOOOOOOOOM!!! all over again.

Meanwhile, the Mayor is setting up a remembrance ceremony for Bluella and those lost in the “Great Whale Explosion”…

….it explodes more. Will they never learn? (Quimby “accidentally” sat on the plunger.) He announces she will live on as they will use every left over part of her body. “From blow hole to fluke.”

Homer, still feeling bad, tries to cheer Lisa up with a new pet…that will never die. An invisible dog. Lisa is still sad and goes for a walk around town. She thinks she hears Bluella…in Moe’s squeaky door. Then in Martin’s cries…as he is getting an atomic wedgie. Then in the sounds of the balloons the street performing Mime is using to make balloon animals…in the shape of a Whale…that pop and explode into tiny pieces in Lisa’s hands.

She ends up at the beach in the impression of Bluella, where she hears Whale calls again.

This time though, there really ARE Whales. Two of them. She assumes they are Bluella’s calves…surrounded by SHARKS!!! COME ON SIMPSONS! NO MORE DEATH! A Bunny can only take so much. I’m gonna start blubbering.

Homer to the rescue! He aims his harpoon to rid the Sharks, but is stopped by a bunch of Sea Huggers there to protect the Sharks.

Homer ignores them and goes around them and after the Sharks again, but this time Lisa stops him (a poor bird is not so lucky). She doesn’t want one creature to die while trying to save another.

The Sharks ram their boat and Homer falls into the water. The Sharks, thinking HE is a baby Whale, now all start to swarm around him. The Sea Huggers try to “help” him by tossing a bucket at him to hit the Sharks with. It instead literally cracks his head open. “Maybe the blood will scare the sharks off”. Lol.

Just as a Shark is about to eat him (Hey ToxicShark…is THAT you? Lol)

(Now I don’t feel so bad accidentally buying 2 Whales. I got a Mommy AND a Daddy.)

Lisa wonders if they will be okay. According to Homer, he will find a nice Octopus, settle down, and have lil whalopus babies.

(Marge tells the kids they can go home and draw pics of what Homer just described.)

So there you have it. An entire episode on the Whale that is now available for purchase with gulp 300 donuts.

This entry was posted in Where Did THAT Come From and tagged premium, Squidport, The Simpsons Tapped Out, TSTO Add Friends, TSTO Addicts, TSTO Valentines 2014, Valentines Day 2014, Whale. Bookmark the permalink.

20 responses to “Where Did THAT Come From- WHALE”