From the Mouths of Addicts: From the Addicts Mailbag

Welcome to another edition of From the Mouths of Addicts, where YOU get to sound off on anything and everything in the world of Tapped Out!  This week’s post comes to us form a few different tappers.  Everyday we receive TONS of emails from you guys with fun shots of your town, random thoughts about the Simpsons & of course…we’d be lying if we said it wasn’t…our favorite admiration for TSTO Addicts!  So we thought this week we’d share a few of the emails we’ve received recently.  So sit back, relax & enjoy the trip through the mailbag 🙂

First up a great email and another glimpse at some AWESOME artwork from our friend and Addicts Reader WanderingCaveman.  You may have seen him wandering in the comments, and we love chatting with him too!  For our last Addicts mailbag we showed off the artwork he created that was inspired by Bunny and he promised to sketch the entire Addicts team….well he’s been coming through!  Recently he sent us in his sketch for well..me 🙂  With a little cameo from Bunny and Wookiee too!  Check it out:
First he sent us a little preview…
I was hoping to have this finished sooner, but since it’s not, I figured I would send a sneak peak of the next sketch I was working on. Originally I was going to do a full on illustration of the Addicts team but Bunny’s reply made me realize Alissa and Wookiee might feel left out, and since the illustration is taking such a long time, I figured I would do a couple of sketches for Alissa and Wookiee in the meantime. So hear is a little preview of a sketch in progress for Alissa (with a Bunny cameo), hope you guys enjoy it ( I should have it done in the next day or so).
Thank you guys for feeding the addiction and don’t let the drama llamas get ya down.

What followed a few days later was AWESOME…check it out:
Hello Addicts,
As promised, here is some fan art for Alissa. Hope you guys enjoy it.
WanderingCaveman

Well WanderingCaveman..we LOVE IT!!!!  Absolutely LOVE how you captured our personalities!  Can’t wait to see your interpretation of the Wookster!

Next up an email from bcnya92.  bcnya92 was out shopping and saw some Simpson inspired shoes and just had to share!  Check it out:

Hello All,
I saw these at the Converse outlet store yesterday & had to share the pics. Simpson’s Rule!
ID: bcnya92 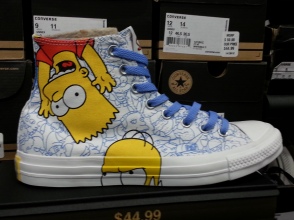 Thanks bcnya92 for sending us in those awesome shoes and for thinking of TSTO Addicts while you were out shopping!

Next up is an email from scarlet that was sent in after our Simpson LEGO Post!

I would love to have the Simpsons Lego set!  And so much more.  But what I want the most is the giant soft Legos used in Legoland.

Thanks for the email and great picture Scarlet!  And yea I want those LEGOS too!! So Bunny reached out to her contacts at LEGO…here was the results.

Hey Bunny,
Never tired of you! I asked the team about these Giant LEGO bricks and what I found is that Amazon.com is the only place that sells them. I found the link for you below, but I have to warn you: they are OUTRAGEOUSLY expensive- $499.95. It does come with 84 bricks though!

Let me know if there is anything else I can help you with Bunny!

Hmmmm…maybe I better save up a little. Lol.

Next up is a great comment we saw from EvilKitten812 on one of our posts the other day.  Seems they had a bit of a problem with their Tapping device crashing and EA came to the rescue to restore their Springfield!  Check out this great comment, and great reason to play TSTO!

“I started my redesign today (in hopes that another update is still a few days away) I was super nervous and putting even the first few decorations in inventory had me sad since I do love how I had my Springfield. BUT I did want to share something great about EA and TSTO. Granted we all have great ideas for new things they could add, I am just thankful for all they already have. My tablet crashed yesterday and I had to factory reset it. Because of EA I have lost nothing in my game. But I do play other games. They have restarted me at the beginning. Many levels and limited time items gone!!! The only thing those developers will do for me is offer in game currency. And only if I send them screenshots of the game I lost. Apparently they didn’t read the part in the email where I said my tablet crashed. I lost all screenshots and photos of everything (even though I had cloud backup) all in all, we should be greatful that EA helps as much as they do for any issue. Granted there are certain issues that take time to fix, but they (and origin) save all the Springfield’s out there so if your device fails you, your $$ and time are not lost. Sorry for the long post, I just wanted to share the upsides in the game developers lol.”

I completely agree with you EvilKitten!  One of the great reasons to play TSTO is the Origin backup!  While we all cringe when they servers are down and get Bart screened…it’s great when EA can restore our games back to how they were if there’s a problem with ANYTHING in them!  Thanks for sharing your first hand account! 🙂

And our final email comes from reader Tabi with some Simpson fun they saw on Pintrest!  Check this out:

I think this is awesome!  Totally want one for my house! 🙂

Well that’s it for this week’s edition of From the Mouths of Addicts.  What did YOU think of the emails from readers?  What do you think of Wandering Caveman’s drawing?  Or the Simpson Converse?  Or the giant LEGOS?  Or even the Marge Scrub Brush?  What are YOUR favorite things about TSTO?  Why do you tap?  Sound off in the comments below.  You know we LOVE hearing from you! 🙂

And keep sending us those emails!  You never know when you might end up on the next From the Mouths of Addicts!

Once a week (at least) we plan on showcasing your words (art or video) for the world, and TSTO Community, to read!  Here’s your chance to sound off on anything and everything in the world of Tapped Out.  Simply send in your posts to our Addicts email account: TSTOAddictsblog@gmail.com (many of you already do) and we’ll do the rest!  We’ll pick (at least) one post to be showcased here on Addicts every week.  So send us your posts…we can’t wait to see what you have to say!

10 responses to “From the Mouths of Addicts: From the Addicts Mailbag”