Driving Cross Country In TSTO Can Be a Confusing…

As some of you may know, and perhaps even followed, my wife and I did a 30-day, 9,600 mile driving trip. As it is roughly 3,000 miles, coast to coast from Oregon to NYC, you can tell by the mileage that we did a bit of “meandering.”

What we really enjoyed most on our trip, was staying off of the Interstates as much as we could, and feeling the personality of each new town or region as we moved through it. There were some days that we went from High Desert, to the Mountains, to a Valley, and to an Ocean beach, in a single day (and that was just in Oregon!).  It was amazing…as each region, state and town has a unique flavor that set it apart from others, and left an impression of the people who live there, as they are shaped by the environment and topography of their geography and climate.

It occurred to me, that in my current Springfield layout, that “urban/update sprawl” is creating some pretty jarring transitions that would make an average traveler wonder if they have driven into some huge Orlando “Hands Across America” attraction…or had eaten a bad Peyote bean in their chili…

Add to this, that with the newest update, we may be slipping inside of a wormhole along the way, and transitioning not only through distance and space, but time!

The real question here is, “How Do You Make Sense of This in Your Springfield??”

I have been playing since the first week of October, 2012. Yes. That makes me cringe to admit. But, it is, as they say, what it is.

In the early days, it was EAsy (see my emphasis on EA?? Clever…right?), to create and arrange a Springfield that made sense. Some (not many) actually began, and tried to maintain a “Realist” approach to where they placed the primary Springfield buildings, based on copious research of the Simpson’s opening screen credits, endless notes on watching clues from episodes, and of course, the Simpson’s Movie.

A couple of guys even went so far as to lay out a detailed map of what “the Real Springfield” looks like, that resides on the WIKI to this day. You can find it HERE  —

Do you see anywhere on this map a place for a huge Clash of Clones Castle Installation? Or even worse, some “Future Springfield” that sits right next to an “Old West Springfield?”

This is where things get sticky in the “Modern Age of TSTO.”

I define the “Modern Age” as the period AFTER the “Clash of Clones” update in August, 2014. I realize that this goes a long way back, but it was the first time that EA and the writers simply went off of the rails and said, “Hey…we know this isn’t really anywhere in the show…but we don’t care…we’re gonna do it!”  The subtext of this, could have been, “We’re burned out on trying to do stuff that is Canon…and we all play Clash of Clans…so live with it! Besides…we already GAVE you Stonecutters! The castles and stuff kinda fit in…right? They ARE made of stone!!”

I kinda went with it…placing most of me remnants of COC near my remnants of Stone Cutters…but DEEP in the woods, away from my “normal Springfield.”

Yes..it is kinda random. But, so was Clash of Clones!

According to the Wiki, “Clash of Clones” was the 64th update in the game. We are currently on the 137th content update.  Yikes.

I admit that there were some amazingly “Canon” updates that were perfect for a “Real Springfield,” that focused on “real characters,” that didn’t overload us in clutter and random buildings. Springfield Heights, The Terwilligers, and the Monorail all met those criteria.

But, that means that there were more than a 100 that were questionable. Most notable were the two Superhero updates, Burns Casino, Money Mountain, Tap Ball, and the Wild West updates that all left strange footprints in our town, if you used even HALF of the stuff we won…let alone the Premium stuff being offered.

Is it any wonder that many of us are hitting the dreaded “Item Limit” message?

And now…with this new “Future Springfield,” it’s like we need more than just some directional markers and stop signs to make sense of things…we need a “Wormhole Ahead” Sign!

BUT…I HAVE SEEN SOME AMAZING TOWNS FROM MY NEIGHBOR’S, who have admittedly handled this dilemma far better than I have.

I get more than attached to the “Core Springfield” areas I have in my town…and haven’t altered much of it for years (other than figuring out how to add Monorail track to most of it).

However, I have, like many of the real life cities we visited, succumbed to urban sprawl, using mostly the “new land” offered by EA, to plop stuff down during the updates…and then do my best to find continuity after rearranging it in the lulls (which are also becoming fewer these days).

My town makes perfect sense…until you “head South” (or right, if you are scrolling). The transition from my boardwalk/Squidport area, into a restaurant and recreation district, and into Burns CasinoLand, makes sense…until you head “East” and go into a Launch Pad and Air Museum (I rationalized that), and with little buffer, into an expansive Wild West area, that butts uncomfortably close to a “modern city portion” created during the first SuperHeroes….which also has an airport…and leads into the “manufacturing zone” and “enchanted storybook/StoneCutters/Castle region.”

And it gets worse, when I added land for the Wild West Update…but it was close to my huge installation of “Super Heroes Modern City” stuff. This is after I rearranged it, to make room for an homage to the trip, including a Los Alamos bomb museum, Arches National Park, Caves and Teddy’s National Park.

I realize that many of you have no problem using the NUKE button. But I just can’t. I don’t even know where the “briefcase with the launch codes” is these days.

And now…I can feel some real challenges coming on with the SciFi update…because there are a TON of new buildings and decorations…and I admit to loving this update enough to have already bought the Montgomery Burns Institute of Soul Extraction…which is huge!! ( Yes, I dressed it up a bit with the X-Ray truck and one of my transporters).

But now am faced with the “DO I REALLY WANT A WHOLE SEGMENT OF MY TOWN TO BE IN THE FUTURE???” question that begs for “Mooch Bart” to come with a DeLorean and a Professor Emmett Brown figure. Of course, time travel in the DeLorean would be futile in TSTO since none of the cars move…much less reach the required MPH to trigger the Flux Capacitor. 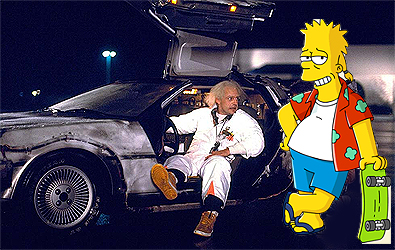 Please. I’m asking for your help… how do YOU solve this “REAL-vs-Random” dilemma???

Are you actually OK with “Future” versions of your main characters making a permanent home in your Springfields????