The nerds have invaded Springfield!  Ok just one nerd, and he’s not all that bad.  And only in Springfield can Professor Frink, with the help of Homer, open up a black hole that transports doppelgangers, robots and Stephen Hawking (!) to our pocket sized Springfields! This multiverse event hit our devices and it’s full of alternate universe inspired decorations, buildings & characters!

is the Mech Robot, because Bart needs someone to channel that boyhood angst…

you’ll automatically be awarded the Mech Robot and you’ll see this message popup:

And you’ll have an option to place or store it for later.  Remember if you store it you’ll have to go into your inventory later to retrieve it.

The Mech Robot is a decoration for Springfield…HOWEVER Bart will have a (permanent) task using it.  And there will be an initial quest that pops up with this to earn you some extra

Bart: Check it out! A  real live mechanical weapon of war!  Does it come from the distant future?
Homer: Nope!  We just took a wormhole to Best Buy.
Make Bart Ride the Mech- 7hrs, Earns 66 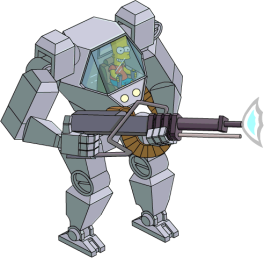 However, the questline is the only time you’ll earn

for completing the task.  After the initial time it’ll change to cash and xp.  So it’s just a little 66

Here are some quick facts about the Mech Robot:

Size: 5×5, will leave base when task with Bart occurs and walks around Springfield.
Build Time: Instant
Conform-O-Meter: Vanity +100
What Does it Do?: Cool animation with Bart for a 7hr task (after initial questline it earns $250,60xp).  If not in use it’s just a decoration for Springfield.

And there you have it, the details behind the Mech Robot, the first Sci-Fi Act 3 prize..

.  This will be the next prize we breakdown in the prize guide post.

So that my friends is the full breakdown of the first Act 3 prize!

What do you think of the Mech Robot? Have you unlocked it yet? Where have you placed it in your Springfield? Enjoying Bart’s task with it?  Sound off in the comments below, you know we love hearing from you!