Where Did THAT Come From – Wickerman

Christmas is over, the Wookiee’s getting fat… time to put a penny in the fuzzball’s hat… (a penny for my thoughts I guess).

Woo hoo! It’s holiday time in TSTO and all of it, while certainly a different take on the time more in tune with solstice than other holidays, came with lots of goodness. This means the Wookiee gets to chime in with origins for most of it. That’s right friends… it’s time again for me to dip into my noggin of Simpsons info and write about specific stuff. For this post I will be going over the sixth prize that was available during Act Two of the 2016 TSTO Holiday Event… the Wickerman. But what does an item named after a scary movie from 1973 and/or a scarily bad one with Nick Cage from 2006 have to do with the Best. Show. Ever.? Let’s take a look at the TV Series to find out.

First up, I get the homage to a druidic custom during the time of Julius Ceasar but let me just say right off that this new decoration is not actually anything to do with that. It’s actually from a recent episode parodying the Burning Man Festivals that all started with an effigy on San Francisco Beach in 1986 and then turned into the neopagan festival in the Black Rock Desert of Nevada that happens every year. Its website advertises the event as “A city in the desert. A culture of possibility. A network of dreamers and doers.” Long story short… my thought is that the Wickerman is actually the Blazing Guy from “Blazed and Confused” (S26:E7). 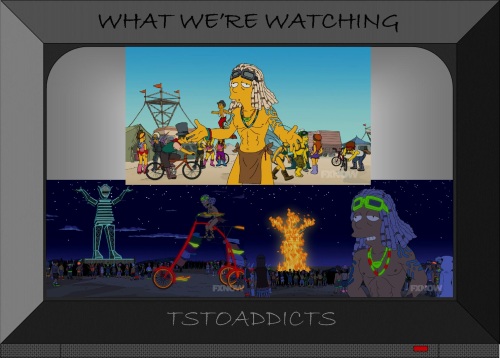 This episode is all about Bart getting a new teacher named Jack Lassen that he is none too happy with. His goal of getting rid of Lassen (played brilliantly by Willem Dafoe) coincides with helping Homer book a spot for their family vacation which leads our favorite family to the Blazing Guy Festival. You know… a place that combines “nudity, dust storms, children, and all-consuming fire.” As Homer describes it, “a desert steam punk Disneyland. It’s a world of “anarchic free expression” and cupcake cars. A place Marge can trip after drinking some adulterated calming tea. If you want more about this episode… check out the recap. Okay… maybe Blazing Guy looks completely different from the Wickerman but I’m gonna pretend the version we got in our game is just the 2016 version from the festival. They decided to go more classical than neon rather than insult Celtic traditions. I wouldn’t be surprised if Mr. Lassen was behind it all. Let me live in my fantasy world, okay? 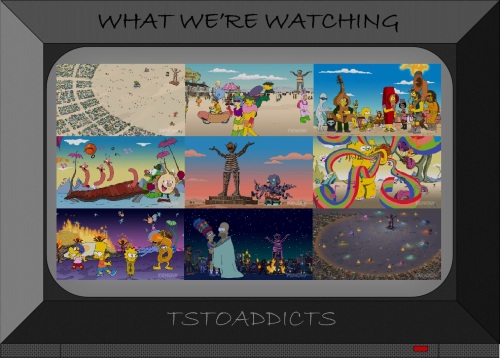 There is another wicker sculpture we could look at. In “On a Clear Day I Can’t See My Sister” (S16:E11), there’s icy roads, a field trip to Springfield Glacier (melted by Global Warming), Sprawlmart, and Gary Busey in the episode. Sounds like the holidays to me. Especially the sibling rivalry between Bart and Lisa stuff. While not a Wickerman, Bart builds a wicker version of Lisa in the episode. It’s the wicker witch of the west and the fire represents Lisa’s musical ability lol. 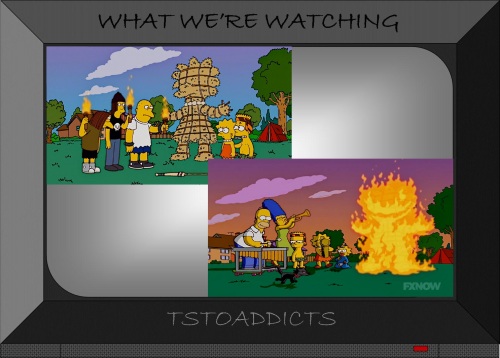 So there you go… two episodes I think may have inspired the EA designers. I’m going to at least pretend they did before I imagine more sacrifices to be made to enjoy this event. I certainly wish they’d used one of these options instead. Thankfully it was a prize and didn’t cost us anything but time. All part of the necessity of getting Maggie in her cute little snowsuit. What are your thoughts? Ever see either one of the Wicker Man movies? Remember these episodes? Sound off in the comments.

12 responses to “Where Did THAT Come From – Wickerman”