Where Did THAT Come From – The Wiccans & the Dunking Device

Christmas is over, the Wookiee’s getting fat… time to put a penny in the fuzzball’s hat… (a penny for my thoughts I guess).

Woo hoo! It’s holiday time in TSTO and all of it, while certainly a different take on the time more in tune with solstice than other holidays, came with lots of goodness. This means the Wookiee gets to chime in with origins for most of it. That’s right friends… it’s time again for me to dip into my noggin of Simpsons info and write about specific stuff. For this post I will be going over two premium items that became available during Act Two of the 2016 TSTO Holiday Event… the Wiccans (110 donuts) and the Dunking Chair (80 donuts). But what do these witchy items have to do with the Best. Show. Ever. and Christmas? Let’s take a look at the TV Series to find out.

It’s snow time in Springfield and this episode that aired November 2009 fit the bill for all of us that wanted a snow day in the show. We didn’t get the holidays but we certainly got our first taste of paganism. Only took nine years for it all to show up in TSTO. I knew this episode would be about a more realistic holiday season right from the beginning of it. Oh football… how great I know you’ll be at the end of every year. Too bad the best thing about my Chargers is the long-sleeved shirt my kiddos gave me. Anyhoo… it all starts as our favorite family are departing The Snowed Inn. Nothing like holiday traffic to make you feel festive. “I hate traffic. The band and the phenomenon.” Good old Homer. After some bonk it, whack it, twist it, smack it hilarity and then the consequences from some stop it, kill it, crush it brake-blocking by Homer (“why do my actions have consequences?!?”), the family careens off the highway to a presumable icy ending. “We’re about to get really cold and really warm.” Thankfully Cletus is right there to save them. Bambi was not so lucky.

We find ourselves in a two-plot episode. One involving moonshine, Cletus, and Homer AND the other with Lisa and some girls up to spiritual mischief. Lisa ends up hiding way too good while playing with Cletus’ girls. It might also have to do with their inability to count to 100 but calling a 3 a backwards ‘E’ and a 4 a “one-legged triangle” make me smile. Lisa runs into the Wiccans while being lost in the woods. While the cauldron is seen in a visual task for the new TSTO characters, it also resembles the one that can be earned through crafting.

They’re not terribly thrilled on their esbet being spied on. Lisa is doubtful about the power of their circles but is semi-convinced when she gets out of her pipe-cleaner project at school. All signs point to witchcraft being involved. Lisa returns to the coven to find out if they made Miss Hoover sick. Lisa may be a sceptic but Wiccans being defined as a minority group by Dartmouth and Cornell does make it interesting. Also the whole worshipping nature thing has its appeal for her. It’s off to Wiccapedia to learn more.

Bart is excited about Lisa joining the dark side but thinks it might be too early for his sis to be a witch. Lisa is seriously considering an innocent vision of being a witch with Snowball as her familiar. Problem is she’s seen by nosy neighboreeno Ned Flanders. Before Lisa can officially join the group of Lilith-lovers and be sanctified as a witch, the ritual is stopped by the Springfield PD.

Springfield is up in arms over the Wiccans and holds its first witch trial in twelve years. The result is a curse that blinds half the town. We also learn the leader’s name isn’t Gwendolyn Nightshadow… it’s Stacy Deathsatan. What a name for someone who’s part of a group that believes “in friendship and befriending the Earth.”

The flimsy case is dismissed but not before the town decides to have justice of their own. Bring on 17th century law in Springfield via the town charter and Willie constructing the “ultimate instrument of colonial justice”… the dunking chair.

Have no fear though. No innocent children are harmed in the episode. The blindness is from moonshine because this episode has two plots that beautifully combine and are funny. My favorite part is the country bear jamboree. That’s really about it. Wiccans and hillbilly moonshine in the water AND Homer enjoying the dunking chair at the end of the episode just like the TSTO task that came with the premium decoration. 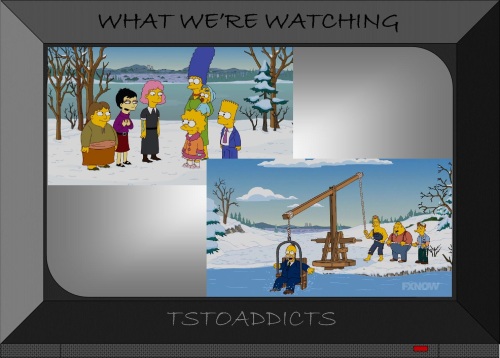 I do think it is very interesting that one of the Wiccans has the same tattoo as Snake and Cletus. Secret coven perhaps? What do you think of the offerings (pun-intended)? Did you buy them? Remember the episode? I think tall of this is in the spirit of everything that happened this holiday event. Homer’s task makes me laugh just like the episode and Lisa could always use friends. Sound off with your thoughts in the comments and I hope the event has been easy for everyone.