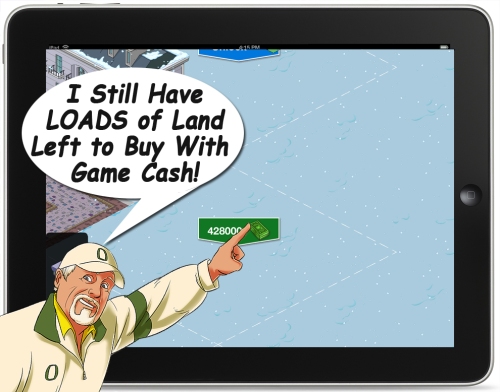 Let’s be honest about it.  We have become a very, very, entitled little bunch when it comes to Christmas updates.  As I wrote about last week, there are FAR more important things in the world to worry about than if we get what we want, when we want, and how we want…in a mobile game.

It’s kind of like what happens to a spoiled kid at Christmas that gets everything on his list…and then gets tired of playing with a lot of his toys, because he has so damn many of them!  Parents end up trying to figure out where to put everything…and kids just move on to the NEXT thing they want.

But, I get it. I saw loads of comments about the dearth of land in the game, combined with the wealth of stuff we are getting in the update. One of you or more actually pushed back when I said, “quit yer whining…I have LOADS of land left to buy” by telling me to do a Friday Filler on Land Management in our games.

Well…me and Santa have a lot in common (besides our love of cinnamon rolls and wassail), so I am going give you your wish, and do just that.

How I have it all…and still have land left to buy…with GAME CASH!!
END_OF_DOCUMENT_TOKEN_TO_BE_REPLACED

Bust out the tinsel and be sure to hang those stockings by the chimney with care because Christmas time is in the air! That’s right my friends, Christmas (and snow, lots and lots of snow) has hit our pocket-sized towns!

This year EA is trying something different, as I’ve laid out in this post, in that Christmas 2018 consists of multi-events.  Basically, the Simpson family will host four stories to be told over the course of December with a new story releasing each week.  As we’re taken through each story a series of prizes are released to correspond with the theme of the story.  For Week 2, Act 2, we’re following a Buddy Cop tale by Bart, and the prizes we unlock all fit into the snow theme.

So let’s take a look at the third prize this week, Deep Freeze.  A full character for Springfield… 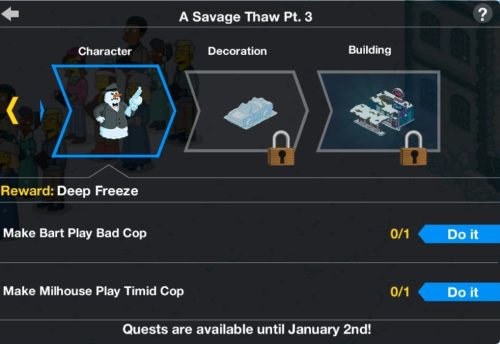 END_OF_DOCUMENT_TOKEN_TO_BE_REPLACED

Should I Spend Donuts On Anchor Management and Don Brodka?

Grab your Santa hats and break out the tinsel because it’s Christmas time in Springfield! Yes the annual TSTO Christmas event has arrived in our pocket-sized towns, covering our usual perfect weather towns with a fresh blanket of bright, white, snow!   Of course, by now, we all know that a new event means a new excuse for EA to fill our stores with limited-time premium items to tempt us.

As we all know, that limited-time label can tempt us to grab everything in sight because it’ll be gone soon.  But don’t sweat it!  That’s where we come in to tell you what’s worth those donuts and what you might want to hold off on.

Wondering if you should add Anchor Management and Don Brodka to your Springfield?  Well before you hit that confirm button let’s break down the pros and cons of adding this security combo to your town…

END_OF_DOCUMENT_TOKEN_TO_BE_REPLACED

Posted in Should I Buy, Tapped Out