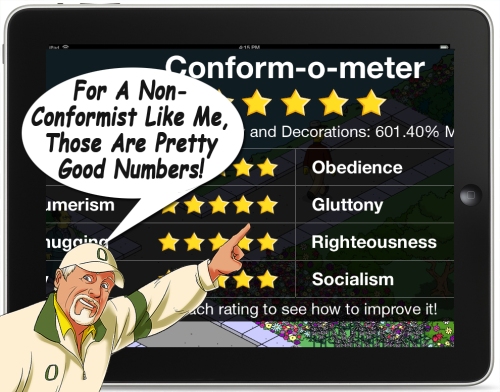 Let’s be honest about it.  We’ve been waiting for a very long time for some fulfillment.   And when we finally get the  answer, and it’s not what we were hoping for, you can do one of two things.  Lament, or just roll with it.

And no… this is not a political post. It is the simple admission that while we were CERTAIN that an update… something really great…something that would answer our prayers would finally drop (and I’m STILL not talking about politics) it didn’t.  The answer to our prayers was actually just another “sorry…no real answers yet” that leaves us having to come to our own conclusions while we wait for the REAL answers. And yes.  Maybe this time I’m talking about TSTO and maybe something else.

So…when there are more questions than answers, and you have loads of time on your hands to burn, you might as well be productive, and get to  work making it EAsier to be happier in the future…when the real answer drops.  And at this point, I’m not really sure what the hell I’m talking about anymore.

Wait.  The headline.  That’s Right… increasing your Bonus XP to increase your Farming Yield! Making it EAsier to get more of what we don’t know we want yet!
In other words…improving your ability to earn more while doing less, by working a bit more now.
No matter how you slice it, donut farming, whether it be KEM farming, or Rat Trap Truck/Bloodmobile farming etc. comes down to maximizing your Bonus XP.  If we are using farming vernacular ( and who doesn’t like to use a good farming metaphor?), you are spending the time to fertilize your crop for a higher yield on every KEM/RTT/BMB farmed. In basic terms…for everything you collect, you are closer/faster to getting a chance at three Bonus Donuts (Bonuts).

Now, as I have said before…as it pertains to farming, and building up my XP bonus, I am inherently lazy.  I just don’t have the time, or want to spend my time, doing the boring, grinding, accumulation of Bonus % items required to reach 1,000% or more XP Bonus.  Of course…I was also late in actually starting a retirement fund in my real life…but I digress.

It always just feels like the time I spend on TSTO should/could be more productive if I am grinding for stuff in updates, and building things in my town (like a golf course).  Yes, I realize that those who have huge bonus multipliers are more directed at NUMBERS over aesthetics…and this may come down to some primary personality differences.  While I would rather design, they would rather accumulate…and their towns usually look like it..

However…after weeks of pretty easy, almost grind-less options in the game, and an extended period of time building my expansive golf course, I found myself in the unenviable position of not really having any excuses for NOT taking some time and donuts to build up my XP Bonus a bit.

And, that’s when I noticed something weird (even for EA).

Rather than treating the recent “Yearbook Mystery Box” the same way they do with Black Friday (a limited time offer), it now appears to be a permanent fixture in our “Premium offerings” right along with the REGULAR Mystery Box.  Weird. But, very convenient…as is the Vault, which also usually features items that carry larger Premium bonus XP for a price. 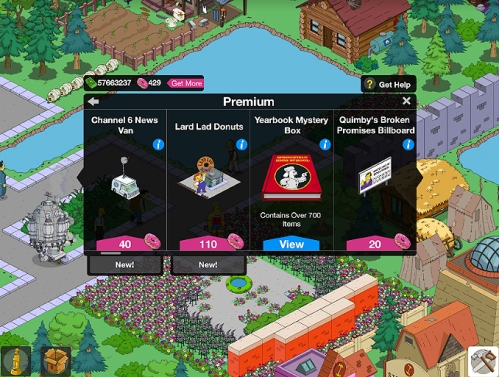 The trick, is really understanding your best use of donuts to buy XP Bonus. And yes…in most cases, you have to invest donuts in order to earn more XP Bonus, so you can earn more donuts EAsily.  Don’t ask me to explain why you have to put money into Social Security and Medicare so you can get it out in tiny drabs when you are older…but the concept is similar.

But, getting back to my story… I had been hovering at around 580% Bonus XP for a long time. And, because I thought we were going to have a major update this week, but didn’t (don’t get me started on how lazy I think EA has become), I had a little over 500 donuts accumulated and ready to burn.  In addition, I had more than $50M in game cash…and was still accumulating more with every cycle of my character/building clearance, and casual KEM farming. Not efficient.

This told me two things. First, I could actually afford to add a few more slots of KEMs in my KEM sludge ponds and keep cycle parity (spending no more than I earn every cycle), and that I might as well spend some of my donuts on trying to increase my Bonus XP up to at least a nice round number of 600%. 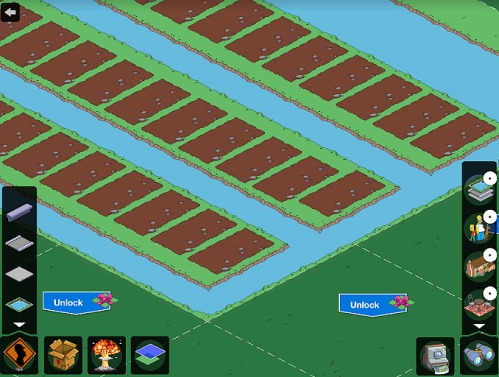 So now, with THREE ways to easily acquire items that provided good XP Bonus yields (Vault, Yearbook,Mystery Box) I set out to build my XP with the most efficient use of my donuts.

Yes. The Yearbook is great for getting stuff you want, that you may have missed in the past.  But, when it comes to efficiency of building XP Bonus for the smallest number of donuts invested.  It blows.  Even if you are going for something HUGE…with LOADS of bonus XP, like the Murderhorn, it may take you at least 150 donuts to get 5% (5 attempts at 30 donuts each). 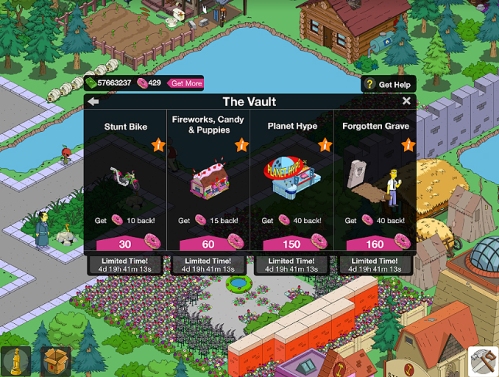 But, it only offers up a handful of items at a time. Today for instance, my best offer is 3.75% bonus for Grimey and the forgotten grave.  Don’t ask me why I didn’t buy this when it was offered. 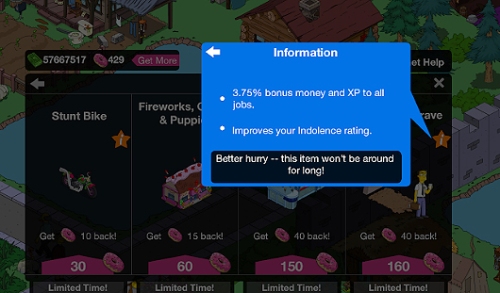 But, at just 120 donuts for a character and a decoration (after the 40 donut rebate), it is a good deal.  Unless you are actually trying to build your Bonus XP. In which case…as I proved to myself once again…the best yield for donuts spent(that same 120 donuts), is still the Basic Mystery Box. 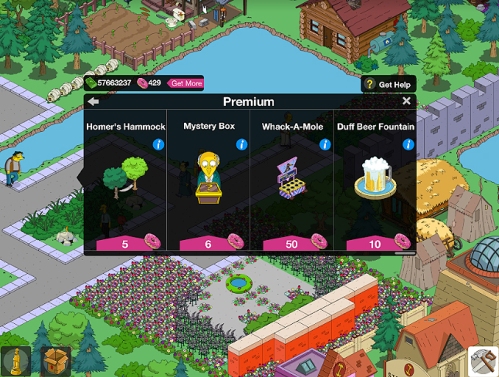 It’s a grind. There is no doubt about that.  You are going to have to collect a ton of random crap that will go right into your storage (mostly ponds, carts, and _ONDAs).  But, even though the return is posted at being just 5% for a Premium Item, it’s return is actually far, far better…at least for me. 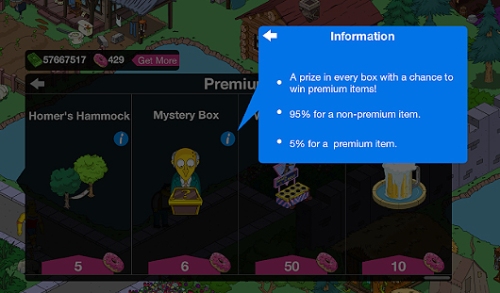 Without boring you with details… by spending just over 120 donuts at 6 donuts per try, I earned items that accumulated the 20% of Bonus XP that I wanted. I earned 8 Itchy and Scratchy Billboards (1% each) and 6 Channel 6 News Vans (2% Bonus).  That was helped significantly by being rewarded 6 different Bonus Donut Prizes of 10 and 30 donuts each. CRAZY…and EAsy. EA is really becoming benevolent these days.

And then I stopped. Because I got bored…and tired of hiding my News Vans.

I hid them all over the place behind buildings, because that many news vans in plain site just looks stupid. 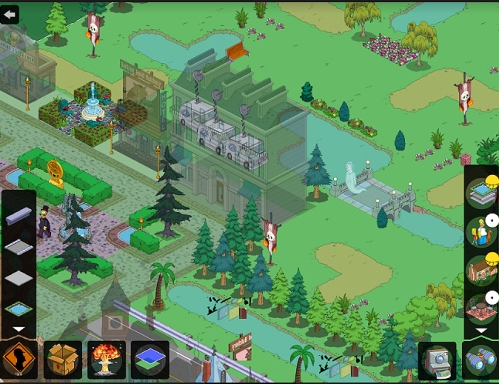 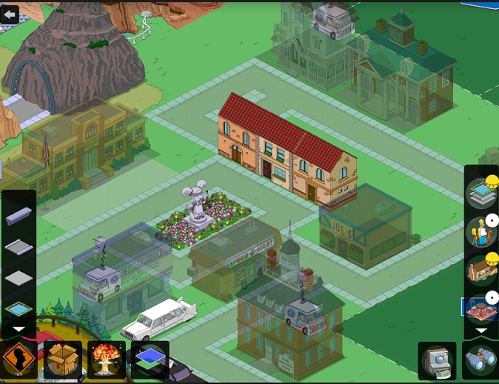 I placed the Itchy and Scratchy signs along my freeway that divides my Shelbyville from the rest of my Springfield…and was simply content with an hour well spent. 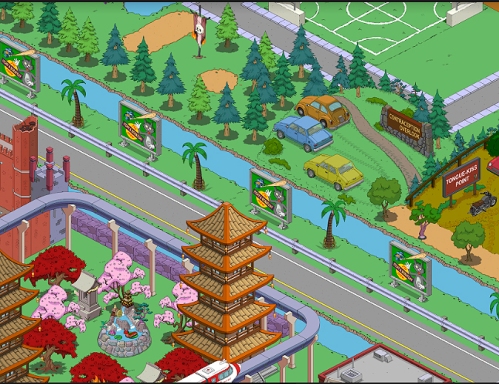 Yes. The whole thing took about an hour of my time.

But, not surprisingly, between the extra KEMs that I was able to add with the new free land tokens, and additional game cash I was earning, and the added Bonus XP…I was now earning an extra 6-9 donuts per 8 hour cycle. And that adds up.

I know myself.  I will never be one of those people obsessed with a million of this and a billion of that, just to do it.  I like creating too much, and there is only so much TSTO time in a day I’m willing to spend out of the REAL currency of life (time).

But, I do like the fact that EA has forced me into something that actually makes the game EAier…if they ever actually give us a new update worth playing. Downtime and boredom do add up to productivity, if you really are bored enough.

Life. It’s full of compromises…and lowered expectations…and putting up with stuff that you shouldn’t have to put up with.  And yes. I am finally talking about politics. But, not here.

Play the game as you wish. Buy what you want, or take a chance on the Yearbook. But, know that sometimes…the best way to do things, is the old fashioned way that those before you did them. The best known “mystery” is how efficient the Mystery Box is at building Bonus XP.  Just do it.

Have a great weekend. Use your downtime to build more uptime rewards!