There are so many theories floating around right now, about the death of TSTO, that one has to ask, “What the???”

OK. So, I realize that isn’t much of a question or an answer. But, you have to admit, that it is a bit early to speculate, when the game continues to chug along, working just fine…but without new content.

The servers are still on folks!

In the 7 years of this game’s existence (that’s 91 years in Mobile Gaming Years), TSTO has been pulled, almost pulled, and pretty much written off for dead several times.

The first time, was when EA actually pulled it off of the App Store.  The first release in Feb 2012, had loads of issues and server problems…prompting EA to finally pull it in August of that same year.  The game didn’t come back in it’s relatively present form, until late September of 2012. But even then, it was plagued by server problems, and glitches that would often take the game offline for days at a time.

After a few great updates and relative stability, many of the TSTO faithful, including me, thought the game was definitely giving us signals that it was coming to an end.
END_OF_DOCUMENT_TOKEN_TO_BE_REPLACED

Well guys, I can sum up the lack of information about a new update with 1 emoji…

Nothing is in the files, nothing has been sent from EA, so your guess right now is as good as mine.

This isn’t the first time we’ve had a long gap between updates, but it’s the first time in a long time.  (curious about the update releases?  Check out this post for a complete list of every TSTO update and its release date)

What does it all mean? 🤷‍♀️Could mean something, could mean absolutely nothing.  At this point, no one knows what anything means.

So for now, panic 😲…or don’t.  Relax…or go crazy 🤯.  Feel free to speculate 👀 in the comments…or feel free to rebuke the outrageous speculations.  Your call.

I’ll be back later with some more detail posts you guys have been asking for, or 🤞 info about a new update.  We shall see what the rest of today brings.  ✌

As a side note, if they’re going to end the game they could at least have the decency to add the Giant Toilet I’ve been waiting 6 years for… 😂😂😂 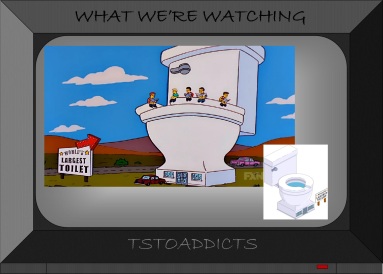 Updated Thought: Anyone else think EA is just sitting back and laughing at everyone freaking out over what they’re doing?  They’re probably at their desks just laughing away at us…

Another Updated Thought: There’s also this to think about from Matt Selman…

The brand is still strong pic.twitter.com/BP8oXBfEDg