Friday Filler – When is Enough, Really Enough, and When Is It Just Hoarding?

Well…as you may or may not remember,  a year ago I started a massive remodel of our house, with almost top to bottom remaking of the kitchen, two bathrooms, and flooring throughout the entire first floor main living area (family room, kitchen, bathroom, dining room, living room, stairs).

I have done all of the work myself…and with everything that has gone on during that year, find myself a bit awe-struck that I am not actually done yet (I still have an entire back deck tear apart and rebuild). But, then again, as I have also found out, once you start remodeling, and your wife is the primary “contractor” and you are “the worker,” you are never really done. All of the new, makes any of the old look shabby by comparison. And, even worse, that damn HGTV channel is still on the air, giving “the contractor” more ideas.

But, absolutely the worst part…is the massive land fill that now must be hauled off in a dumpster, along with decisions on what to do with the rest.  Clutter…thy name is Patric.  I admit it. I hate to throw away anything.

AND, to the point of this post…WE FACE THE SAME DECISIONS IN TSTO.  “Keep…store…or sell.”
Not unlike TSTO, owning a home presents very real limitations of size, which at the end of the day are hampered by area and Item Limits. There are days when I wish we had some sort of extraterrestrial governor that placed such limits on our home. But that is not the American way.  We are free to gather, collect, and hoard to our heart’s content.  It is very much a “First World Problem.”

And so we create entire businesses based on adding storage units, expanding closets, building sheds, and adding on carports (when we have converted our garages to more places to harbor our junk).  I am not exempt from this concept. I have built a large shed, that is bigger than the average family living structure in most third world countries.  Our “middle storage room” is twice that size, and was born out of the need to store all of the kid’s crap when they went to college. They have all long since graduated…but their crap has seemingly taken semi-permanent root as an homage to an excess of “important” memorabilia.

It’s pretty much based on the premise that “this could be valuable someday!” My 88-year-old mother has spent years keeping a notebook of all of the “valuables” she is going to pass down…and who is to have them.  Of course, the only real problem is, we really don’t want about 99.9% of the stuff.  We are trying to get rid of our OWN stuff.

This cartoon really hit home on a few levels. First…while I inherited my Grandfather’s pocket watch when I was 13, my Mom didn’t let me actually take it until I was 55. It sat in a lock-box in the bank.  I on the other hand, gave it to my oldest grandson when he was 13, and it is proudly displayed in a case in his bedroom.

But, he has also made it very clear (as have all of my kids and my other grandkids) that there is very little of my myriad collections of “very cool stuff” that they want when I die. I get it. It’s old…and maybe a little weird…just like me. 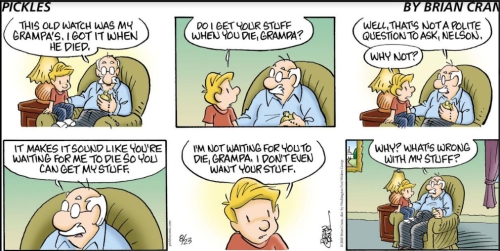 But, I get it. This kind of obsession is driven by stories like the recent auction of a Mike Trout Rookie Card…HOLYFREAKINSHIRT!

But back to the game…kinda.

As I said, making decisions to unclutter, actually come about when you DO unclutter, and the result is so pleasing. Like the before and after pics of our living room, which while we were doing the remodel, became a storage unit.

The problem of course, is that what we took out of the room (after the kitchen cabs were installed), was taken down to the “guest room,” which is now the “staging area” for sorting, where everything we have deemed to be “less than,” goes into four basic categories.

FOUR CATEGORIES
1. Save It (We aren’t REALLY ready to get rid of that Beatles poster from 1969)
2. Donate/Give It Away (Kids get first crack…then it goes to St Vinny’s)
3. Sell It (You REALLY have to care enough to deal with packaging, shipping, or having people show up at your house to haggle…even after they have agreed to a price online)
4. To the Dump ( a necessary sin…which is why we are getting a dumpster…and will go to hell when God starts checking our “carbon footprint”).

AS IT PERTAINS TO TSTO
1. Display-Decorate- Is it something I WANT in my town? And is it worthy of a click on the Item Limit tally?
2. Sell (if you can) – (It’s one great way to reduce clutter…and who the hell needs 20 Beast Toilets and 31 Bomb Shelters?)
3. Store It (the GREAT news about TSTO storage for hoarders, is that it is unlimited).
4. NUKE IT (in the case of TSTO It is a VERY Drastic Move.

There are days when I actually envy our next door neighbors…whose house burned down a few years back.  Harsh. But true.  It made the decision of “what to keep” so much easier.

Shortly after the fire, my wife and I used to play the game, “what would you grab if you had to leave the house really quickly.”  Unfortunately, it’s a reality for loads of people in California and Louisiana almost every year.  My list became large enough that I realized I needed a car, and a crew to move it…and would likely perish, trying to save it all. FAIL.

Here’s my overly revised list of “essentials” that I would try to pack into the back of the car, on the run…
1. 3 guitars (my ’59 Danelectro electric, with a practice amp, my 1991 Taylor acoustic, and grandfather’s 1922 Gibson L1 acoustic).
2. A pillowcase full of my antique lead soldiers
3. The painting of my Dad and I when I was 2
4. The hard drive with all of the family videos and pictures on it

Of course…in a pinch…it would be the hard drive, my grandpa’s guitar, and the painting.  The other guitars and the soldiers are insured…and I’m pretty sure none of my daughters wants them.

SOLUTION FOR THE REST… Digital ownership. Just take pictures that you would save on “the cloud” (the ultimate storage room that requires unending updates, renewals, and passwords, in order to view your stuff).

George Carlin, had the perfect bit on “stuff.” It has never been more true. (be warned, he does use a word for “stuff” once in a while that is a more common vernacular for excrement, which is actually less offensive sounding than the word “excrement”).

In the meantime…we will battle with 60+ years of accumulated “stuff.” Wish us luck. It’s going to be great having all of that free space, so we can have more room to display our stuff.

What would YOU take with you? Remember…you only have a few minutes to survive.  What would be “irreplaceable” and worth the risk of losing it all?

31 responses to “Friday Filler – When is Enough, Really Enough, and When Is It Just Hoarding?”