Blimping ain’t easy… but it sure is fun.  So what’s up folks?  It’s Super Bowl Sunday and we got a F-F-FREE decoration today from our benevolent progenitors at EA (Sorry, I started school again and feel edjamikated).  The Duff Blimp is a rad addition to all of our towns.  I know most of us were expecting the Valentine’s Day Event but I think the little surprises from the Super Bowl tie-in are nifty. 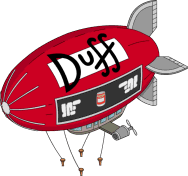 Every time I see the Duff Blimp, I immediately think of the real-life famous dirigible aka the Goodyear Blimp.

When I was a wee lad, there were advertisements for it with the tagline, “Hey look… it’s the Goodyear blimp!”.  This was something commonly said whenever people saw the blimp in the air although I can only really remember two instances personally.  (Basically the same thing as a Southern California kid saying, “There goes that news van again.”)  What I really think of when I see a blimp is Ice Cube’s “Today was a good day” but more on that later.

Zeppelins, Dirigibles, Blimps and Balloons.  Basically all giant floating  conveyances originally thought to be the next wave of air travel that were later relegated to advertising and sporting events coverage.  NERD NOTE: The needle on top of the Empire State Building was actually originally designed to be a mooring mast and depot for dirigibles. 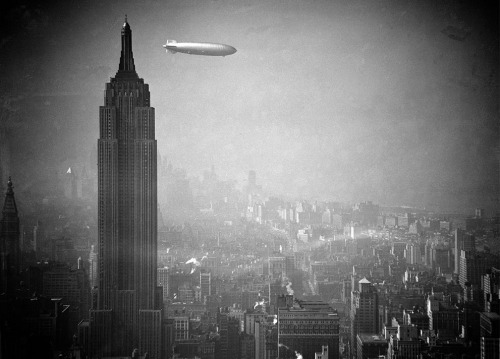 The first appearance I found of the Duff Blimp was in Season 4, Episode 4: Lisa the Beauty Queen.  At the Springfield Elementary School Carnival aka “The Happiest Place on Earth”, the Blue-Haired Lawyer tries to etll skinner he can’t use this slogan because it is copyrighted material owned by Disney.  In a rare Skinner sticks up for himself moment, he beats them up Green Beret style.  Copyright expired… So funny.  AT the carnival, Homer wins the grand prize in the Springfield Elementary raffle… a ride in the Duff Blimp.  A grey one at that. 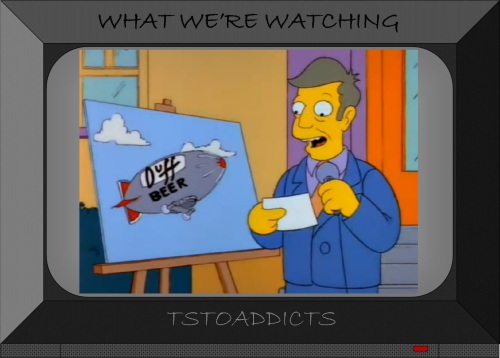 He later sells his precious ticket to Barney to pay for Lisa’s entry into a beauty pageant.  Parenting is sometimes about those tough choices.

Later in the episode, Barney asks if he can drive the blimp and crashes it Hindenberg style.  Oh the humanity!  Anyway…  how about this little ditty Homie sings…

“Hey there blimpy boy, flying through the sky so fancy free.”

Next up we have Season 4, Episode 16: Duffless.  This is my favorite blimp appearance probably because I just love this episode so much.  Homer has to quit drinking for 30 days due to a DUI.  I’m sure you can imagine the hilarity that ensues.  Poor homer naturally notices all the ways life makes him think of alcohol.  From alcohol fueled cars at science fairs, to commercials, billboards, trains and the Duff Blimp which rains bottles of Duff upon poor Homer.

Don’t want to say too much more about this episode other than it’s a classic, well-written from beginning to end and one of my favorites.

Season 7, Episode 9: Sideshow Bob’s Last Gleaming.  Ok… you’ll hear me say I love a lot of different episodes but this one goes high on my list mainly because it makes fun of the Air Force.  I’m a veteran so I get to make fun of my beloved chair force and the jokes here make me laugh every time I watch this one (They’re even funnier if you served with pilots).  Sideshow Bob raking up piles of condom wrappers to prepare for an air show  is just genius.  There are so many great jokes here AND the Duff Blimp… still gray.  “Duff and the Air Force: 50 Years of Flying High”.

This joke might have made me laugh the hardest.  Second place goes to SVT’s 3 medals.  Did I mention R. Lee Ermey makes a cameo as an AF Colonel?  Sideshow Bob is found out to be hiding in the Duff Blimp which is apparently floated with helium.

Nerd note: I looked this up and blimps actually are floated with Helium.  Basically giant balloons that can float for days.  Also discovered you can float a 50 pound child with 1,620 balloons tied to a chair.  Anyone down for a Super Bowl experiment involving a Bunny?

Our next appearance is in Season 11, Episode 19: Kill the Alligator and Run.  Just a quick fly by during Spring Break in West Palm Beach, Florida.  Seriously… Spring Break there is off the hook.  Go Air Force with bases close by IRL! 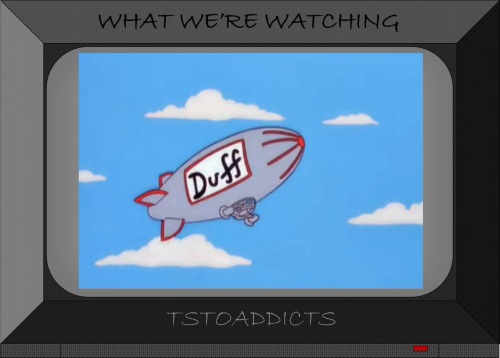 Ok… this one is a gem and shows off the Duff Blimp in red.  Season 16 Episode 19: Thank God, It’s Doomsday.  Homer is convinced the Rapture is coming after seeing the devil and whale blood from the sky.  He predicts that “the stars will fall to the Earth”.  Who knew Homer’s prediction would coincide with the Blue Angels flying through the Duff Blimp, sending Krusty, Duffman and other celebrities participating in “Krusty’s Celebrity Salute to Specials” falling to the Earth?  Apparently only Homer.  This is a funny episode revolving around Doomsday.  FACT: The Rapture does happen and Homer convinces God to undo it.

Moving on we have S17E22: Marge and Homer Turn a Couple Play.  This episode just sounds dirty to me.  Homer and Marge are trying to save the marriage of local baseball star Buck Mitchell and his stripper/pop star wife Tabitha.  Things don’t look good but Homer saves the day by hijacking the Duff Blimp to send messages to Buck from his wife.

In a scene that is seen often, the duff blimp crashes.  This time it is into the stadium after Buck pops it with a homerun.  There’s something about blimps that insist they come crashing to the ground.  Oogle “New Jersey and German balloons” for more info as to why this might be.

For folks that like crashes, the appearance in Season 19, Episode 9: Eternal Moonshine of the Simpson Mind does not disappoint.  Another crash… this one right at the beginning of the episode caused by snow.  Oh No!

Season 20, Episode 15: Wedding for Disaster.  Another quick flash of the blimp at the end of the episode floating over Marge and Homer’s 4th wedding. 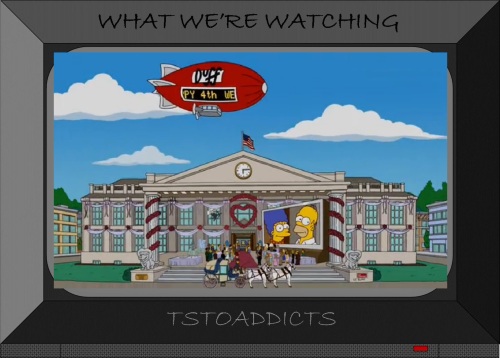 The Duff Blimp is a big part of Season 22, Episode 21: 500 Keys.  Courtesy of a giant wedding cake and Maggie locking herself in the car, the Simpsons family finds a stockpile of keys in their key drawer.  Among all the keys are a mailbox key, window washer lift key and a spare to Springfield Elementary.  The entire B plot of the episode revolves around Homer finding a key to the Duff Brewery where he takes none other than the Duff Blimp for a spin. 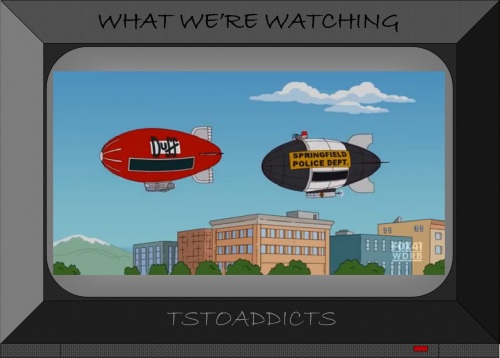 While it has nothing to do with the blimp, I love this line from Bart: “Maybe this key will be the key to putting the key in anarchy.”

The last view comes straight from our most recent episode.  In Season 25, Episode 11: Spec and the City, the Duff Blimp flies across the screen right before we see those 11 yellow letters marking another laughfest.  Kind of makes the gift from EA a reverse episode tie-in. 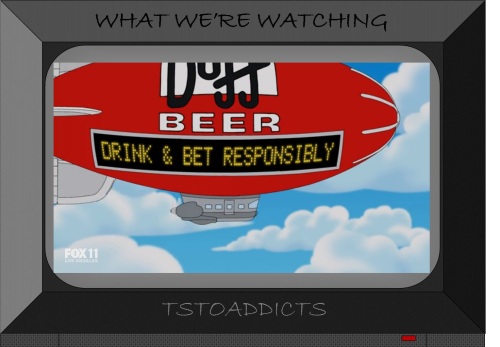 I also found this photo of a real-life Duff Blimp created for the premiere of the Simpsons Movie.  Guess the Gracie folks dig the grey version better.  (Way to show THEM EA!)  If you check out this site.  There are other way cool photos from the event there as well.

And that wraps up another installment of where did THAT come from.  Whoever you’re rooting for in today’s game, I hope it’s a fun day.  Even if you have no interest, can’t watch it or don’t even know what a “Super Bowl” is, it is Sunday Funday…  Enjoy yourself!  Have a Duff or two.

Did I miss an appearance you want to share?  I’ll be the first person to let you know I’m not infallible.  There are a lot of episodes to watch.  What do you plan to do with your new blimp?  What does your voice sound like after sucking out all the helium?

“Even saw the lights of the Duff Beer Blimp and it said Wookiee’s a pimp.”