We’re sitting in a little bit of a TSTO lull right now, as we wait for “the next big thing” to hit our games.  Some of you are working your way though the last few parts of Level 49 & others (like myself) are building their cash flow back up after blowing 10 million + on new land.

Of course whenever there is a lull in the game many of us start to go back and take care of some of the little things we’ve been neglecting during the madness, like town deigns or finishing up that premium questline.  We’re noticing more and more questions in the comments about a few older areas of TSTO (areas many seasoned players may have forgotten about) & some of the finer details of Level 49.  So I thought I’d take a minute to go over a few tips, tricks & reminders we may have forgotten about or completely missed the first time around.

First up let’s talk talk about the Old Abandoned Warehouse. 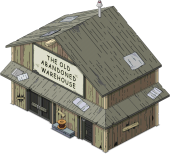 This Level 49 building will not unlock until you’ve reached Part 6 of the Baking Bread questline.  Once unlocked, it can only be placed on Squidport. So if you’re seeing red when trying to place it (even if you have a ton of open space) make sure you’re on the Squidport tiles & not the green grass of Springfield.

The current max of Squidport tiles is 151.  So if you’re tapping on your Squidport entrance and getting the “You have made the maximum number of boardwalk sections” message, that means you’ve created all 151 tiles you can create.  Unfortunately, there’s no way to get more at this time, so if you’re stuck on space you may have to redesign your Squidport a little to fit the Abandoned Warehouse.

Also relating to Squidport tiles.  Once you make the tiles, they’re yours forever.  Even if you delete them, they won’t actually leave your game.  They’ll be stored in your inventory…under Squidport OR where you find the road, water & pavement tiles.  So feel free to delete your entire Squidport and start over again, you won’t lose any tiles.

Earning more money in the game. 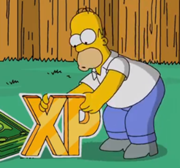 Even the most seasoned TSTO player can find themselves getting cash poor right now, especially with the new land that was just released.  I was one of those Tappers that had a large bankroll in my game & once I saw the new land available with Level 49 I quickly dropped 10 million + on those precious land squares.  So how do I earn my bankroll back up quickly?  It’s simple…play often.

I’ve always been one to leave plenty of buildings available to tap for my neighbors, but since there are no new Friendship prizes at the moment & vandalism doesn’t really bother me I’ve been clearing my buildings frequently to build my bankroll back up.  So tap your buildings, send your characters on frequent tasks.  Use task times that match your playing ability.  If you can get into your game every 4hrs, send them on 4hr tasks.  If you’re tapping every 8hrs, send them on 8hr tasks.  You get the idea.

Note: There is a detail about task lengths I’ll cover under Valentine’s Day a little later in this post.  So be sure to check it out before assigning long tasks for your characters.

We’ve got a great article by a newbie tapper here, that’s designed to give you some more tips and tricks to earning cash quickly.  I highly recommend you check it out if you’re struggling to earn cash quickly.

For new players, remember, it’s not a race to the newest level.  Take your time, build up your bank account.  As long as you’re past Level 5 you’ll still be able to participate in all the new events that hit the game.  So have fun with it & build your Springfield the way you want to.

We say this all the time, but it bares repeating for new players….For those tappers concerned about their Righteousness Rating, Training Walls should be your best friend.  At +10 Righteousness points each Training Walls are the BEST items in the game to give your Righteousness rating a boost (and make it so you really don’t care if you were vandalized).

Note: Training walls will unlock for purchase (in game cash) once you reach Level 33.

Bunny, Wookiee & I all hide these all over our towns & our rating never dips.  They’re small enough that they can be hidden behind buildings or even worked into designs.  Here are a few examples: 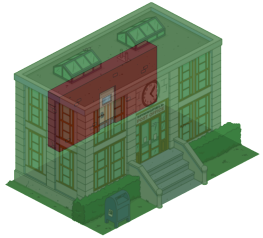 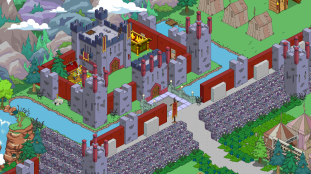 Random Tasks (this section added after the post went live)

From time to time you’ll see a random task popup for various characters, there will be no dialogue associated with it.  Just a task popping up to send Grampa to Tell Stories or Bart to have  Sleep Over etc.  These are supposed to happen.  They’re random tasks assigned by the game, designed to keep you engaged in the game.  So don’t think you’re missing something with them, they’re supposed to be there.  And as you progress further into the game, they will ALWAYS be there.  You can clear one & another will appear.

Unlike actual questlines, you can ignore these.  They will just sit in your task bar until completed (and another will take it’s place once complete), but they won’t prevent you from progressing in the game.  Personally, I tend to leave them for a while.  I have a random task for Grampa to tell stories sitting in my task bar & it’s been there since Christmas.

So take random tasks or leave them…but don’t think your game is glitching out on you.  It’s just the residents of your Springfield saying “don’t forget to play with us too!”

And finally..Valentine’s Day/The Next Event:

We don’t know when the next event, which we’re all assuming at this point is going to be Valentine’s Day, will hit.  Last year Valentine’s Day hit our games on February 5th, so it’s possible we will see it later this week.  Here are a few tips to keep in mind while we wait for it to hit (a lot of this also applies for any impending event):

-Keep your characters on shorter tasks.  Don’t assign any 24hr tasks late at night.  Typically App Store Updates, which Valentine’s day will most likely be, hit our games between 12-2pm EST (Christmas was an exception, that hit after 6pm EST).  Try to make sure your lower level characters (Homer, Lisa, Apu, Flanders Cletus & Krusty) are free around that time each day.  This way if something hits, you’ll be ready.

Curious as to why I said those characters?  It’s because events are designed for ALL tappers to play, once they get past the tutorial (Level 5).  So it makes more sense that one of those characters will kick off the event than Patty or Selma (who aren’t unlocked until level 35).  Make sense?  (Just a quick FYI, for new levels try to keep all freemium characters free, because you never know who will kick that off since you should have every character before that unlocked)

-Start growing Corn at Cletus’ Farm.  I know you might think i’m being crazy BUT last year we were given a task to grow Roses at the Farm.   Because this was a forced task whatever you were growing at the time would rapidly auto-complete for you.  So if you start growing Corn it’s a great way to earn some extra cash and XP.  (FYI this also happened during Easter)

And if for some reason this doesn’t happen, no harm done.  Just store Cletus’ farm and the corn you started growing will be delete & you’ll have the farm back.

-Remember to save your donuts for now.  With a limited-time event (hopefully) on it’s way, there will be returning premium items to purchase.  So if you’ve been coveted Brandine or Shauna in your neighbors town for the last year, this could be your chance to pick them up.  Of course there’s no guarantee they’ll make a return, but is it a chance you want to take?

What are your thoughts on this tips and tricks?  Any of them new for you?  Something you forgot about?  Do you have any other tips for players?  Ready for the next event?  What are you hoping to see?  Sound off in the comments below, you know we love hearing from you!

This entry was posted in Buildings, Characters, Decorations, Tips and Tricks, Updates and tagged How do I earn more cash in TSTO, How many squidport tiles can I have?, Righteousness Rating, Tapped Out Tips and Tricks, The Simpsons Tapped Out, TSTO Addicts, TSTO Level 49, TSTO Tips, TSTO Tips and Tricks, TSTO Training Walls, Valentine's Day 2015, Why can't i place the abandoned warehouse?. Bookmark the permalink.