Friday Filler – Of Hellfish, Black Holes, and Saving the Universe with Discounts 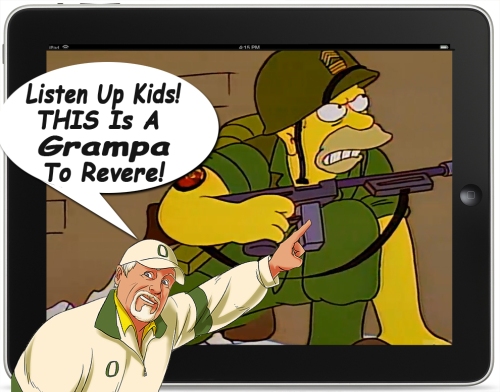 Life is like that as you age… You end up doing a lot of things you didn’t think you would ever do, mostly because your body forces you to do them. Like sleeping in a strange position so your bad shoulder doesn’t wake you up in the middle of night…again…and then waking up anyway, with “monkey brain” (look it up…it’s a thing), as you starting clicking off all of the stuff you have to do…like write a Friday Filler post, and check your town to see where the hell Grandpa is.

The two things I had to do that I didn’t want to do?

1. Take Grandpa off of his duty at the Black Hole
2. Spend REAL money on Donuts

The first one was really one of those things with which I had no real choice.  I have been after EA to do a Hellfish tie-in for years.  It is one of my favorite Simpsons Episodes (S7E22)…loaded with amazing Abe history (as well as some for the other geezers), and has lots of “aaaaahhhh” moments as he and Bart bond, while hunting the lost Hellfish treasure.  We find out the Abe was a war hero, and (surprise) Burns was, and always will be a money-grubbing weasel. 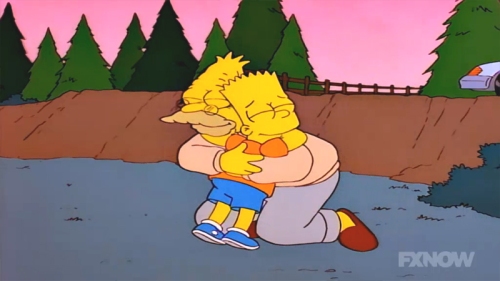 As Grandpas age, life seems to strip back your dignity and self-respect in small, yet erosive ways.  The love and respect from a grandchild is immeasurable.  So…the chance to get Abe and some of the Hellfish artifacts was a “no-brainer” for me. Which led me to #2…spending real money.

Yes…I am a casual KEM farmer, and could have gotten it easily with a week of farming. However…this coming week, I will be on Full Time Grandpa/Dad/Husband duty, as we prepare for my daughter Ali’s wedding on Feb, 3rd. So…getting the Hellfish bundle sooner than later, was a must for me.

But, getting him, forced me to take him away from his REAL duty…Keeping Springfield Safe from the black hole.  I have covered this before…but will state it once again…Abe and Mona keep this universe safe from oblivion, by feeding pigeons into the black hole…24/7.  I don’t trust the fact that there COULD be parallel universes (quantum physics points this way), and I really don’t like the thought of a rip in Space/Time (which is what a black hole basically is).  So…feeding pigeons into the thing to keep it happy, is a bigger job than it seems.

Abe deserves to be respected…IN UNIFORM… and so I needed to buy the HellFish package.

But, at 190 donuts, I could see that I needed more than I had, as I had just come off of a spending spree with the last update. Then…right there…was the answer.  A chance to get what I wanted…and save face by getting the biggest bargain ever!!

Bargains are an important thing in our house. It’s not that we can’t afford to pay full price. It’s just that we don’t LIKE to pay full price.   I use the heck out of Amazon Prime, and my wife Deb, is the Queen of the Quad-fecta at Macy’s (where she has a platinum card awarded her from so much “deal making”).

Every time we get something, the one who got the deal says, “guess how much I paid for this?”  The other person must then offer a reasonable guess. Ridiculous low-ball answers are rude, and suck the fun out the game. However, guessing too high just makes you look stupid and out of touch, or that you don’t trust your mate’s talents at “deal getting.”

Case in point, for the wedding, she wanted/needed some jewelry to match her “Mother of the Bride” dress. Jewelry is expensive…even the glittery “semi-precious” kind she seems to gravitate toward.  Long Deal Made Short…she bought close to $200 (at regular price) worth of matching jewelry…and after all of her discounts, coupons, and “family deal” pricing (Ali’s soon-to-be-husband works for the online division of Macy’s), she ended up paying $36.  BOOM!

I guessed $75.  She who loves Macy’s Deals, shivered with glee when she revealed the price.  It is also VERY bad form to point out to the “buyee” that they already had jewelry that looked a lot like that, and probably didn’t need it at all.

We have a pact…she smiles wildly when she sees Amazon boxes show up on the front steps. I applaud when she enters a room with a Macy’s bag.

I felt similarly proud when I started my Donut Purchase Deal by getting the $9.99 package, which included SIXTY Bonus Donuts…PLUS the Hilarious Hans Mechman Character for Free! Boom…ChaChing!!

Then, with my donuts, I was able to get the Hellfish Bundle…which had a REBATE that made the whole thing just 150 donuts (60 of which were free from the other package)…so BOOM BOOM! I ended up with decorations, a full character, and two amazing historical skins…for just…wait for it...$9.99!!! 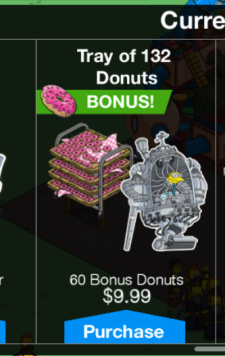 OK.  No. This isn’t as good a deal as Deb got. But, it WAS a deal…and assuaged my guilt for being impetuous and impatient.

Old people need things to do…as well as a little respect.  If this was the REAL world, and Abe was a WWII veteran, he’d be at least 90. He still gets around great for 90…to say nothing of his “saving the universe” skills. I can still remember where I put my keys…most of the time.

And let’s face it, these days, being able to feel that you have control over anything in this reality, is important. Which reality is more real?  The ones we create, or the ones we are seemingly being forced to live through, which feel like some Bizzaro world trying to do us in at every turn and tweet! There are days when I ask this question…a lot.  Our reality is like a strange time-warp…trying to thrust us back to a previous time when war and famine were common place. So, is it any wonder that we cling to talismans of good luck? 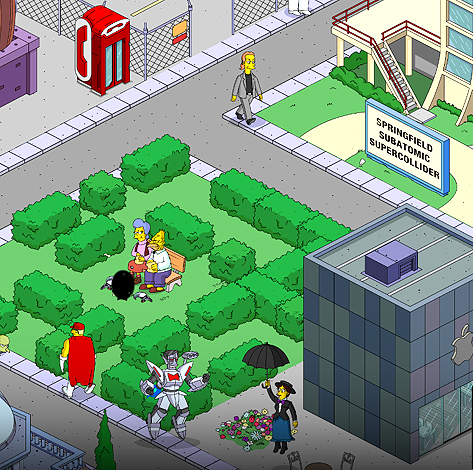 And for me…that is exactly the part Abe plays in my town. He is a talisman of good luck. As long as he and Mona (being dead, she isn’t quite so lucky) are at their post, “All is well.”

If you are into history, or just great movies…these are two out this year that are nominated for Oscars.  “The Darkest Hour” which features the inside scoop on Churchill and the events that lead up to Dunkirk.  And the movie “Dunkirk” which comes from an insider’s view of the actual evacuation of almost 300,000 troops from the beaches of France, by private pleasure craft and fishing boats.

300,000…let that sink it. Simply amazing what the spirit can achieve when motivated to do the right thing.

Both movies are miraculous…and amazing.  For me, Oldman is a LOCK for the Oscar. His portrayal of Churchill is simply mind-boggling.

Back to TSTO…This is a weird little event…but we’ll cover that more in tomorrow’s Addicts Live! Tune in to watch…or catch it in “replay” mode after the event is over.

26 responses to “Friday Filler – Of Hellfish, Black Holes, and Saving the Universe with Discounts”