Ah…here we are again, in a final act of a long event, and some just wishing it was over, while others can’t wait to get more stuff!  Put me somewhere in the middle.

I’ve enjoyed this act. But, as I wrote about recently, the real problem is cramming everything into the space of “FreeLand” that we were allotted.  But, no worries. You can always put this stuff in storage. Or even better yet, bury it under tons of sand for someone to dig up later, and steal, and take back to their national museums.

If you like sand…and have a place to put a lot of sun-baked antiquities…Then THIS IS THE ACT FOR YOU!

Let’s get on with uncovering the tombs, mummies, and ancient paraphernalia!
To some…this calendar is almost moot, in that if you followed our advice, and saved daily challenges, and stockpiled pickaxes, you should already be a day or maybe two days ahead, in the first hour of tapping!

I have already maxed out a ton of stuff…and am now looking at 2 weeks of ho hummy mummy action. But, it’s better than being behind!

I don’t actually have much to say about these prizes. They’re fun, like I said, if you have a ton of sandy dirt to place them on. They don’t belong in Springfield…at all. And there is a lot of it to bury, store, or place!

In my case, it is all going into my “Walk Like an Egyptian…Dig It!” exhibition at the Springfield Natural Museum.  It’s still under construction, until I get the last of the prizes. But I don’t care about bonus bumps at this point, so don’t care if I hit 40% or not.

So Make Room For Mummy(s)!!

The “Magic Daily Math Number is 22,643.  I was going to try to come up with some cool numerology that tied it all to Pope Greg. But, let’s be honest…Pope Gregory wasn’t even a twinkle in his father’s pope stick when these guys were around.

So…We’ll just get on with it!
HINT- Tap every 4 hours…at least 4 times a day…and it will all be yours! 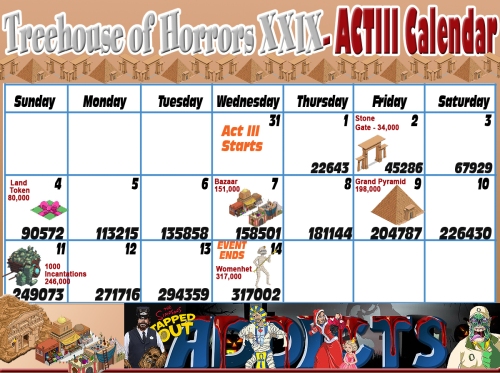 And for those who just want the numbers…

I get it. If you are doing an homage to the great old Universal Studio Monster Movies, then you have to include the Mummy…and if you are going to have a guy in rags walking around town, he better have a date, or he is going to look really out of place at social events. So, like I said, I get it.  But…they bring back a TON of recycled stuff in this act…and let’s face it…one sandstone and granite building pretty much looks like every other sandstone and granite building. So…there’s that.

Have fun. The good news, is that it is easy to get all of the stuff…and when we have a Halloween event that drags out into mid November, Thanksgiving can’t be far behind!