Friday Filler – Time to Take A Reality Check and Some Perspective 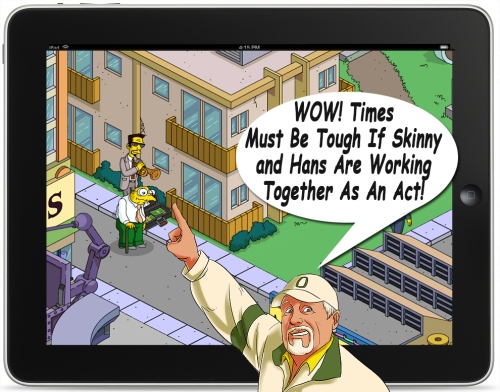 So, let’s start with the fact that if you are reading this, you own a padular/mobile device or computer of some sort, along with some type of data plan or WIFI associated with said device. As 2020 continues to throw us more curves than Henry Rowengartner in “Rookie of the Year,” things that we take for granted (like a daily dose of tapping) shouldn’t be on that list.

I realize that many folks play this “silly ‘lil game” to escape some of the realities of our everyday lives. I would be included in that group.  However, with the game being as simplified and EAsy as it has been the past 18+ months, it offers little respite. But, let’s be honest…as I implied…just having the choice to tap puts us in a category of “entitlement” that we very much take for granted.

I can’t/won’t get into politics here. I can’t/won’t discuss my current opinion of the “state of TSTO,” as both topics seem futile. As a nation…we could do with a whole hellofalotta less debate(s). Topics that should be discussed, rarely are. But, I digress…

So…instead…I am going to veer off course (what a surprise?) and talk about the fact that TSTO turned me on to the discovery of a new relationship…while cementing my allegiance to the community that is TSTOAddicts!

I am a Simpsons fan. But, I am nowhere near the fan that Safi, or Wookieb are when it comes to Simpsons minutia.  I’m sure either of these two would be able to direct me to some arcane reference in the show, where Lunch Lady Dora and Skinny Palmer were revealed as “a thing.”  But, I had no such knowledge. And frankly…I couldn’t find it.

I bought Skinny and KJAZZ (I have been in broadcasting for decades…and had to have it, even though the call letters aren’t right). And once the storyline started unfolding, I had a lot of questions about the Dora/Skinny relationship.

So it was time to do a Goog or two…or three…or six. 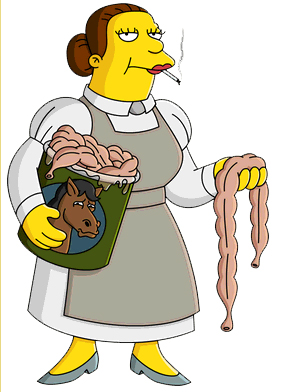 SimpsonsFandom site had this to say about Dora…“She has been implied to have a relationship with Groundskeeper Willie, and her son is Squeaky-Voiced Teen. She once dated Hans Moleman. ”  No mention of Skinny.

The Simpsons WIKI…usually the “bible of Simpsons info” had this to say:
“She was once in a relationship with Hans Moleman, they later tried to patch things up, and were seen together at a cinema. Dora slept with Groundskeeper Willie though this was so the latter could copy the key to the cafeteria supply store., Dora and Willie were later paired up by Professor Frink. Once in the staff room she revealed that she was once suspected of murdering her husband ‘Pete’ but it was never proven as his body was never found, she then offered everybody ‘Chicken Pete pie’. In Homer’s LEGO dream, she and Superintendent Chalmers were found making out when the closet they were in fell apart; it’s unknown whether the two have actually been in a 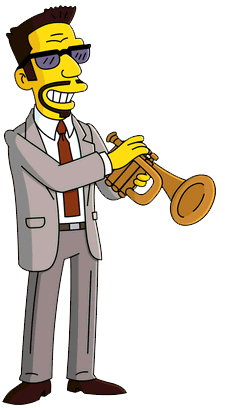 relationship.” Once again….mention of the relationship with Hans, and some clandestine sex with Willie…as well as implied shenanigans with Chalmers….but NOTHING about Skinny.

No matter where I looked (and believe me I looked), I could find nothing “Canon” about Lunch Lady Dora and Skinny Palmer.  Which leads me to this amazing conclusion…

THE WRITERS MADE THE WHOLE THING UP… (gasp!!!)

One other thing seems clear to me…the writer(s) responsible for the incredible new content, had been hitting a bit of the jazz musician’s best friend. Call it what you want, wacky weed, gunja, Mary Jane, ding, boo boo bama, devil’s lettuce (there are hundreds according to the official list by the DEA) the writers had to have had a bit of “outside the box/inside the joint help” to come up with this last bit of dialogue.

In the game plot line for Skinny, Skinny is told by Dora that they “can’t make it on what he makes as a Jazz musician.”  A CLEAR implication that the two are more than just casually dating…and are in fact “shacking up.”  But when Skinny’s trumpet goes missing, private detective, Manacek (no first name given)… is called in to help.  Manacek is described as: “Manacek is a stereotypical 70s detective. He is chauvinistic and thinks of himself as a ladies man, flirting with pretty much every woman he comes across. He doesn’t seem to take rejection as a no and will continue to flirt with women. Manacek himself acknowledged this and said that he can only solve impossible crimes if he’s seducing an amazing woman. has dated Miss Hoover and has attended meetings for sex addiction.”

So yes…the following revelation makes PERFECT sense…if you are a Simpsons writer, partaking in a bit of “happy tobacky.” 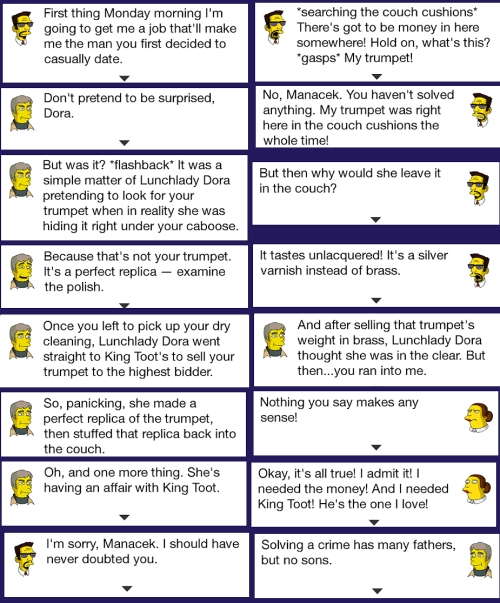 OK…this made a lot more sense to me, once I had a couple of gin and tonics (the dank kush just makes me drool and sit in the corner).  One thing is for sure…Dora (formerly known as Doris) gets around.  And come on…who changed her name?  Is she trying to escape from some other love child from another tryst?

This kept me busy for hours…which is what most of us are doing during this “less than enjoyable” period of human history. Just being bored…and whining about it.

Just when I was getting ready to complain about movie theaters and my favorite restaurants being shuttered…I get a report from Emma, our project manager from our school in Buyijja, Uganda.

After a couple of extra weeks of waiting for the printing to get done (turns out the printers have been overwhelmed with school workbook requests…go figure), Emma and the headmaster were able to go out into the village to give some of the kids their “remote learning packets.”

My wife is a counselor at an elementary school, who has had to juggle massive issues with remote learning for the students. They had to distribute hundreds of laptops, teach the kids the use Zoom, and then work to make sure that everyone was “engaged.” Add to this a growing list of emergency food distribution packages for families that relied on school lunches to feed their kids…and you get the idea that things could not be more challenging.

Until you look at the pictures from Uganda.

THIS is what “remote learning” looks like for Buyijja. Written packets. That will be picked up weekly…to carry them through the next FOUR months…with the hope that the school can re-open in late January.  Add to this the rain season…and…well…I guess you get where I am going with this.

We are facing untold challenges in the world. And the friction, division, finger-pointing, and denial, do absolutely nothing to solve any of these problems…which, are only going to get worse in coming months.

So be thankful for what you have.  As I AM THANKFUL FOR THIS COMMUNITY…who stepped up to make this effort possible.  A small effort to give some hope to children who clearly have little. Education is their only pathway out. And even that is a long shot.

Be grateful for what you have.  Help those who need help, when you are able. 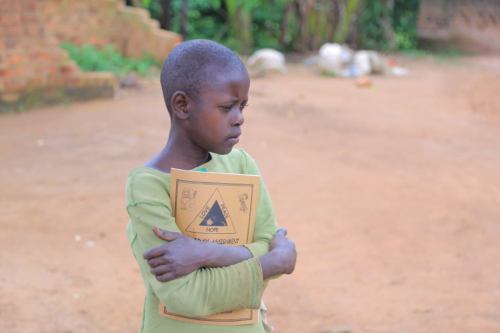 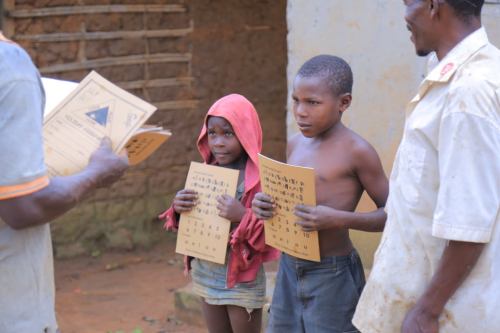 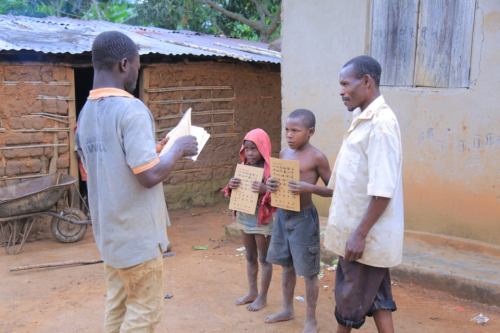 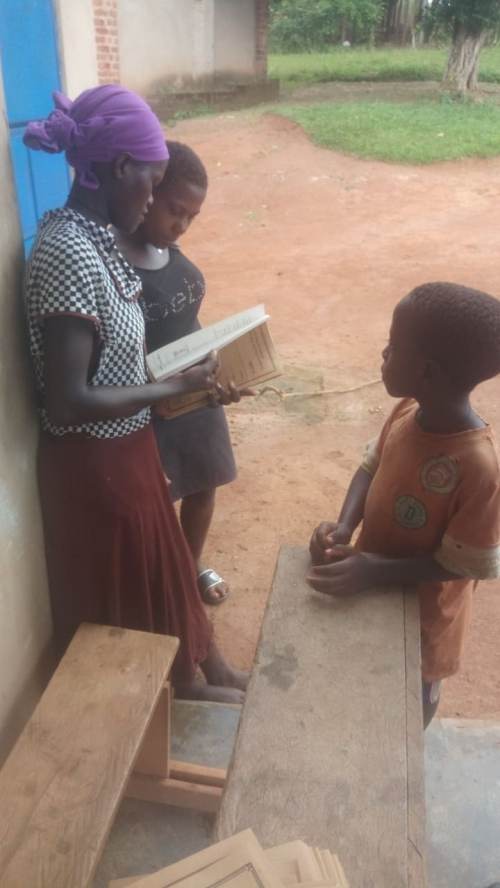 And please…pray that Dora and King Toot can finally find the happiness they deserve.