Welcome Addicts to a new addition to our posts. In this little game of ours, we tend to forget those characters that are few and far between. We get so involved in the game, so into the latest events…that we sometimes forget to pay attention to the little things. The little details that make the Springfield world go around. The thing that seems to be really lacking/missing from Springfield.

What exactly is it I am going on about? What is so terribly important to the game that would draw such attention. WOMEN OF COURSE! To be a bit more specific, The Real Housewives of Springfield (and maybe a mistress or 3. Gotta have the drama aspect in any series, right?).

So keep your eyes on our blog as we take you on a new journey into the lives of each of the women currently and NOT currently available in the game. 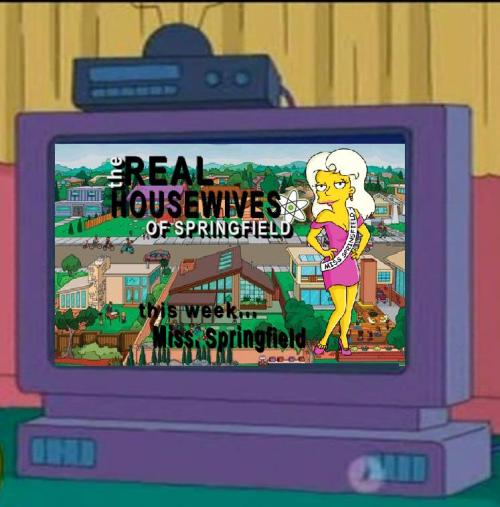 This week we’re talking Diamond Joe Quimby’s mistress, secret wife & baby mamma….Miss.  Springfield.  After all sex, lies & scandal are what  reality TV is all about right?

Ah, Miss. Springfield, the true blonde bombshell of Springfield…with the brain to match!  Her first appearance in Springfield came in the early days, season 4, and in every appearance since she’s only appeared for a moment or two…but every moment has been memorable.  Let’s take a look at some of them now shall we?

Let’s begin with the first time Miss. Springfield appears in the TV series itself. Season 4, Episode 20 : Whacking Day. While only appearing for a brief moment to announce the official start of Whacking Day, the line itself is very telling to her influence over Springfield…”Gentlemen start your whacking!”

It’s not until  Season 16, Episode 4: She Used to Be My Girl, that we start to learn a little more about Miss. Springfield.  Mainly that she can’t read.   As a undercover video is released by a reporter, Chloe Talbot, showing Quimby and Miss. Springfield in bed when he tells her to say what his sash says.  Miss. Springfield promptly replies, “It says Major”.

Once again we learn just a little bit more about Miss. Springfield during Season 17, Episode 7: The Last of the Red Hat Mamas, when she calls Diamond Joe out (in front of his wife and Springfield residents) for lying to him that his wife was dead.  Quimby promptly responds with, “You lied about graduating from typing school!”  (she had trouble with the space bar)

So we’ve learned so far that Miss. Springfield makes the boys go wild, has had multiple affairs with Mayor Quimby, is illiterate & didn’t graduate from typing school (that damn space bar!).   So, what else can we uncover about Miss. Springfield?  Well…did you know her and Diamond Joe are secretly married?  AND the have 3 children together?   Ah the scandal gets better….

Season 16, Episode 7: Mommie Beerest we learn, Marge’s outburst at the “fancy” brunch, that  Quimby is just trying to enjoy a nice meal with his secret family.  A family that includes Miss. Springfield and 3 children (2 boys and a girl).  No wonder she was upset that Joe lied about his wife being dead! 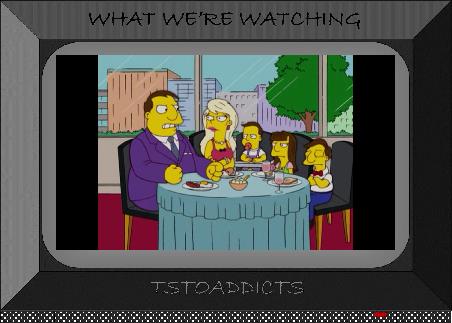 As for our lil game. Miss. Springfield was brought to us courtesy of Whacking Day (grr those snakes!).  She originally was a free character that was awarded when you collected 12,500 snakes.  After the Whacking Day Event EA kept her in the game as a premium character for…225 donuts!  Of course Miss. Springfield comes with the Sleep-Eazy Motel, where else would her and Diamond Joe spend their evenings?  (The walkthrough can be seen here.)

She has a few permanent tasks in the game…

Miss. Springfield has been around Springfield here and there since the early days of the Simpsons.  While she’s not a major character in the show, often times her appearances are just a few seconds (similar to her evenings with the Mayor!) but Springfield wouldn’t be Springfield with out a little scandal right?

Do you have a favorite Miss. Springfield moment?  Have you purchased her in the game?  Or did you win her via Whacking Day?  If so, what is YOUR favorite task?

Until the next episode of “The Real Housewives of Springfield”.

7 responses to “The Real Housewives Of Springfield: Miss. Springfield”