From the Mouths of Addicts: Holiday Wheel Spin Tips

Welcome to the first From the Mouths of Addicts post where YOU get to sound off on anything and everything in the world of Tapped Out!  This week’s post is all about Holiday Wheel Tips & Strategies from our amazing readers here at Addicts!   These are tips and tricks that some of our readers have found work for them* and they were kind enough to share their advice for all Addicted Tappers struggling to get the last few prizes on the Wheel!

With less than a week to go to secure all of those coveted prizes let’s take a look at some of these strategies submitted by our amazing readers: END_OF_DOCUMENT_TOKEN_TO_BE_REPLACED

Posted in From the Mouths of Addicts, Tapped Out, Tips and Tricks

FINALLY!!! EEEEEEEEEEEEEEEEEEEEE!!! A fluffy Bunny is VERY happy right now. Well, kinda. Lol. Something I have been wanting in the game for a while is now here.

We had a lil in game update that brought us a few new items to go along with the Episode tie in for “Married to the Blob”. It included a brand new “never seen before” character, Kamiko. The Swanky Fish was brought back from the past. But the item I was giggling about, MR. SPARKLE. Woohoo!

Yes it is just a simple billboard, but it still makes me happy. (I even did a 2D Mr. Sparkle a while back. Check it out.) 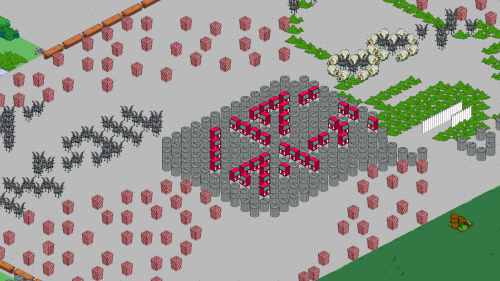 I touched a bit on the origin of Mr. Sparkle in my 2D post, but I will recap it here too in a bit more detail. END_OF_DOCUMENT_TOKEN_TO_BE_REPLACED

Posted in 2D, Decorations, Donuts, Episode Tie-In, Where Did THAT Come From

Ahhh another Episode Tie-In is upon us!  This time EA has gifted us with a FREE Character!  Kumiko will unlock after completing the initial Episode Tie-In dialogue between Homer & Lisa and actually comes with an amusing little questline.

So let’s get cultural!  Here’s your Turbo Tappin’ Kumiko Walkthrough….

END_OF_DOCUMENT_TOKEN_TO_BE_REPLACED

Kumiko is a FREE Limited-Time Character that was released in January of 2014 as part of the “Married to the Blob” Episode Tie-In, also her first appearance on the Simpsons.

You can check out more about Kumiko and the “Married to the Blob” Episode via our Episode recap here and Wookiee’s take here.

Let’s take a look at her Tapped Out Tasks:

Posted in Episode Tie-In, Tapped Out

How are you all this fine chilly morning?  It’s about 8 degrees (Fahrenheit) here on the East Coast of the US…that’s COLD!  But EA has given us something to warm up to this morning…NEW CONTENT!

Looks like EA heard our cries of being bored and decided to give us a little bit of content to hold us over until the next big update….an Episode Tie-In…with a FREE Character! 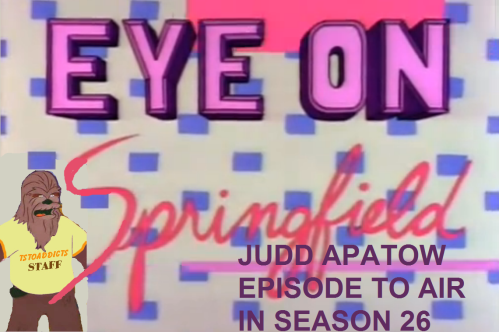 This is just a quick little blurb to share some info I found during an Oogle search. The most recent episode, “Steal This Episode” (S25:E9) was a very enjoyable one.  I especially liked that Judd Apatow made an appearance in it lamp0oning himself.  For fun, I did a search of “Judd Apatow Simpsons” and found out some cool news besides his recent cameo.

Judd Apatow wrote a script for a Simpsons episode apparently and to say I’m excited would be an understatement. To read that it was written in 1989 has me nostalgic for the early years of the show.  The episode is supposed to be a part of the next season of The Simpsons.  I knew Season 26 had been picked up by FOX but to see more about episodes in it really makes me happy that TSTO may be around for a little while.

I have been a fan of Judd Apatow since his amazing show Freaks and Geeks (he was an executive producer).  A lot of his favorite actors that he works with come from this gig and I always get a good laugh out of his movies.  You may not realize he has produced some awesome comedies as well and tweaked the scripts of others.  I linked his wikipedia page above if you want to know more.

Here is the full article for your enjoyment.

And that’s about it.  Told you I’d be quick and if you don’t think that’s newsworthy, go talk to Alissa.  TTFN… Wookiee out!