Where Did THAT Come From – Chirpy Boy & Bart Jr.

Note from Alissa: Good morning Tappers!  We know Level 40 hit yesterday…but we’re also still in the middle of the Easter update.  So we’re going to do our best to alternate posts between Easter and Level 40 so those of you that aren’t quite at Level 40 (and those of you that are) and still need help with Easter will still get all of the info as needed. 🙂
Remember Level 40 will be around for the life of TSTO, so there is no need to rush it.  BUT the Easter Event will end May 13th, so if you’re looking for prioritize your characters figure Easter should trump Level 40, at least for now. 🙂

Ooooohhhhhh…. Lizards.  Two in fact courtesy of the pink egg box.  Nothing like some rapacious reptiles to liven up a town.  In true Addicts fashion, this WDTCF will focus on these new NPCs and let you know a bit more about Chirpy Boy & Bart, Jr.

These new non-playable characters (NPCs) are another of those Easter prizes I think EA found by thinking of obscure egg references from the show.  They come in the pink box (Go Team Blue!) so I haven’t won them yet, but I can tell you they hail from one of my true favorite episodes of the Simpsons that isn’t in Seasons 1-6.  To learn the origin of these too scaly rascals, we have to head over to Season 10, Episode 3: “Bart the Mother”.

This episode starts off with our favorite family heading to the Family Fun Center.  Like any place where you win tickets, most people end up with mustaches or mustache combs but if you’re a thug like Nelson, stealing 6,000 tickets is no problem and you can earn you a BB gun or E-Z Bake Oven.  While hot food is always tempting, Nelson picks the weapon (although food can be a weapon too).

We next find Bart sneaking off to the Muntz house to shoot guns with Nelson.  It’s this fun that brings us the 30 min premium TSTO task for Nelson to “Shoot Car with BBs” ($60/15 XP).  It’s unlocked when the Piece-of-crap Car (30 donuts, 0.75% bonus).  Anyone who has seen this episode though know the POC Car is actually Nelson’s Dad’s shooting car.

Nelson dares Bart to shoot a bird with the BB gun and although Bart tries to shoot to the right, a busted site results in the death of the bird.  Nelson is impressed but Bart is upset.  Of course his mom shows up and she is furious.  She’s also mad because she’d forbidden Bart to hang out with Muntz.

Bart is really bothered with killing something and decides to try and make up for it by caring for the momma bird’s babies.  He takes the nest home and even watches a Troy McClure infomercial to learn how to care for them.  Bart decides that they should be named Chirpy Boy and Bart Junior.  His motherly care is great and includes a sting of electrical cords to a light bulb, cocktail umbrellas and even hovering his tush over the nest.

“Eggs, precious eggs, if they’re to survive they require the gentle warmth and tender love that only a mother can provide…”

Marge learns that Bart is caring for the eggs and isn’t quite as mad with him.  The whole family takes to waiting for the baby birds to hatch.  When the eggs finally do hatch, imagine the family’s surprise to see “tiny baby dinosaurs” instead.

Bart and Marge are off to the Springfield Bird Watching society (obviously headed by Skinner) to see what is up with lizards that hatch from bird eggs.  Skinner informs them that these guys are actually Bolivian Tree Lizards and are a hazard to birds.  They eat the eggs of birds and replace them with their own, only to hatch and eat the mama bird.  These cold-blooded egg murderers are banned by US law and responsible for the extinction of the Dodo, Cuckoo and Ne-ne.  They also have vile plans for birds with dirty names.  Watch the episode for that hilariousness.

Skinner intends to murder Chirpy Boy and Bart Jr. but Bart runs off and tries to free them.  Cornered on top of the Municipal Building, Skinner throws both lizards to their deaths but we discover that Bolivian Tree Lizards have webbed flaps for gliding.  Safe on the ground, the lizards run off to procreate and feast on birds in peace. 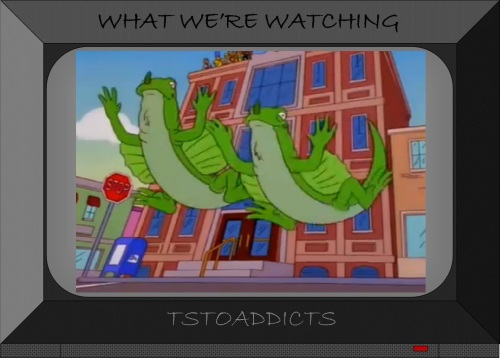 All ends well enough in the episode.  Multiplying like crazy, the lizards end up having a taste for the feathered rat aka pigeon and Springfield is delighted not to have to dodge the chattering disease bags any more.  Kind of makes me wonder if it’s safe for Grampa and Agnes to feed birds in TSTO now.  There’s some great dialogue in the end about ecological consequences, snakes and gorillas between Lisa and Skinner.  Also important to note, Apu is responsible for the lizards to begin with.  In another attempt to save money at the KEM, he imported “Oven-Fresh” Donuts from Bolivia and brought the parasitic tree lizards in the first place.

I love this new prize and seriously hope to win it.  The origin episode has a great storyline with Bart and his mom, exhibits true emotion, has really funny jokes and all ties together really well.  It also includes Lisa with a mustache so you know I’m a fan.  Hope Easter continues to be ok for all my favorite tappers.