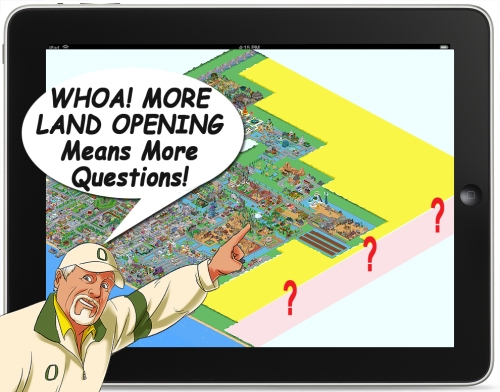 First of all…yes…the snow is still hanging around.  Not happy. But, that’s life…right?  Something pretty, turns ugly, and dangerous, and then won’t leave.  Sounds like my first wife.  (*snare drum/kick drum- Ba Dum!*).

This has been a very odd mini-event. It was ridiculously EAsy…even by today’s mini-event, mini-expectations. I finished the whole thing on Tuesday. As in, more than a week ahead of schedule. And, I didn’t even tap regularly.

I was so busy ignoring the game in my downtime, with a couple of exceptions, that I wasn’t even aware of a HUGE SOMETHING that transpired…that may not just be a Game Changer, but could also be… (Gasp!!) The End Of TSTO as we know it!

Yes. I am talking about the gigantic chunk of new available land that suddenly appeared.  For those who had their pantaloons in a knot over the “Lack of Land,” this was like Christmas, Easter, and Thanksgiving all rolled into one (with the same Biblical implications involved).

Biblical you say? Why yes….as in the “End Times” for TSTO…

Why else would EA suddenly give us a huge new chunk of land (that actually ends up making an almost perfect square), if they weren’t saying, “OK peeps…we’re done with the whole new land bit. Make Due With This!!”

Well…actually…there is a very good reason that there could be something else going on.  As in…after almost 7 years, EA has loads of random ideas and code that they are trying to resolve…and they can’t figure out the best way to do it. So,  they just threw in the towel and said, “Pfffttt….we don’t care anymore. We can’t please them when it comes to land…let’s just give it all to them, so we can concentrate on new content.”

My evidence for this should be pretty clear. But, I’ll list a few tidbits to back up my theory.

Oops. I kinda jumped the gun there.

Here is the current land map….and the Springfield Heights Question just jumps out as “obvious.”
Click to Enlarge Graphics 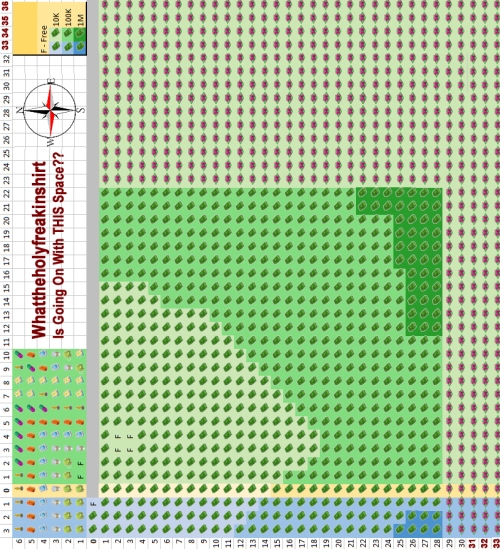 Yes…once again I corrected North/South/East/West…from the map I purloined from the forum.

But maybe it’s as simple as something like,  the “Smart Board” in the conference room at EA, has an “Over-Scan” problem...and the whole random chunk that is Springfield Heights just doesn’t show up on their planning grid.

Let’s face it…besides the random Daily Tasks that show up that makes you collect furniture or coffee cups (which I mostly just X-out and skip), and the bonus XP multipliers associated with some of the buildings, Springfield Heights is almost as forgotten as KrustyLand, before they forced us to Nuke Krustyland. But, as it does sit there…and not in a chunk of ether that requires a magical bus ride to get there, like Krustyland…it is pretty easy to just say, “Meh…the pleebs seem content with running their monorails through the mountains, and spending tons of digital ink on trying to figure out what we are going to do with the land available above Springfield Heights…so, just keep it hidden on the smart board!”

But the new Giant Chunk of Almost Perfectly Proportioned Land does raise some questions.

I can only answer one of those with any confidence.  #4.  No. No I do not need more coffee.

But…there DOES Remain one more question.  If at some point in the near future, they end up opening up another 3 block strip to the right of the screen, thus making it 36×36 for the “Springfield Proper” area (all of the land sans Springfield Heights and the water), IS THAT IT?  IS IT ALL OVER THEN??? 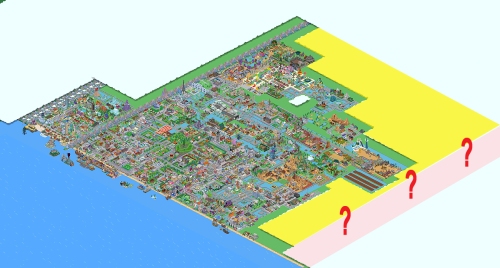 The yellow is all of the land I have not yet claimed… the pink is the “maybe this much more to make it an equal 36×36.

The tip-off that this might happen, is that the “Screen Capture” tool actually shows a small strip of land that is still obvious…yet unopened.  (Zoom to see the lower small strip at the bottom right of the screen grab above).   So my guess…is that the screen capture tool is a tip-off for what is still to come. Maybe sooner than later…

I’m not even going to pretend to try to figure out what is in the minds of EA these days.  But, I can say…that almost without exception, the “mini-events” of late, have proven to be HUGE game-changers.  They have thrown some really big, and really random curves at us during “down-time.”  It’s really hard to understand where this is all going to go.

But, that’s what keeps us coming back. Right?

In the meantime…I added another 18 slots in my KEM ditch-farm. It helps generate another 15-24 Free Donuts a day…without depleting my cash.  I use the water barriers to make adding/deleting the KEMs faster. 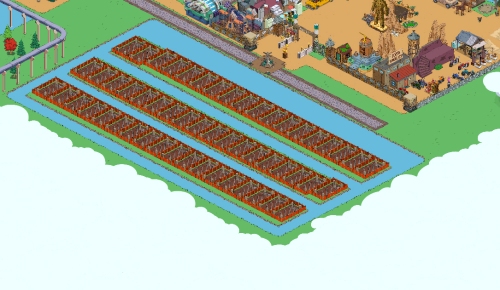 I also have started landscaping my new golf course. Which was made possible by EA raising the Item Limit THREE TIMES in the past week. I was able to add a full nine holes…but, rEAlly wish EA would bring back the Golf Holes to Purchase!  Come On, EA...do a duffer a solid! 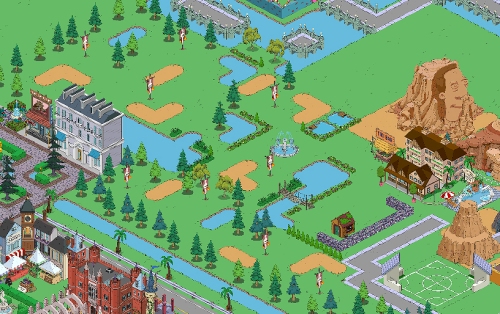 Sorry…should have posted this in the original post! I placed bunch of short track pieces (and then stored them) to see what the new cap was.  It is……..

78 responses to “Friday Filler – New Land, New Questions, and the Future of TSTO”