How awesome is it that that Level 33 includes Arnie Pye?!  Not only that but his helicopter is included as well!  Despite being a premium character Arnie is still a pretty reasonable pick up at only 85 donuts.
For those of you that have picked him up already here’s the Level 33 Arnie Pye Walkthrough…

Arnie Pye in the Sky Pt.1

Arnie: Finally! How can you have Springfield without Arnie Pye!
Homer: My thoughts exactly. Who’s Arnie Pye?
Arnie: I am. You know, “Arnie Pye, with Arnie in the Sky” … where “Pye in the Sky” would be better… that’s the joke.
Homer: Oh, right — Duffman.
Arnie: No! I do the traffic report on Channel 6. Now you’ll have to get out of my helicopter – it’s not rated to lift your load.
Make Arnie Pye Do A Traffic Report (12 hours) 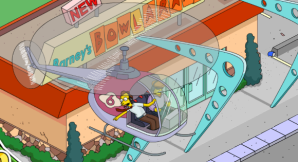 Arnie Pye in the Sky Pt. 2
Arnie Pye: Hey, it’s the Channel 6 mascot dog, Newshound! You all alone out here, buddy? Sort of forgotten and unappreciated by the Channel 6 powers-that-be. Just like your pal Arnie Pye.  Let’s go for a walk. Maybe we’ll give Kent Brockman’s house a nice long visit and you can break a story on his lawn.
Make Arnie Pye Walk Newshound (8hours)
Keep Kent Brockman Free When Finished

Arnie Pye: This is Arnie Pye with your in-depth, rush hour traffic. Everything looks fine. Surprisingly, there is not a car on the street!
Kent Brockman: Yes, it is surprising that you can’t place cars on the street. But Arnie, we need more excitement. How about you do your report hanging out of the helicopter in a sky harness?
Arnie: That sounds incredibly dangerous. Why don’t you hang out of a sky harness, Kent?
Kent: I could never afford to have my thick hair messed up by that kind of wind. You, however, well… just put a lot of sunscreen on your scalp.
Make Arnie Pye Do a Sky Harness Interview (1hr)

Keep Comic Book Guy Free as He Finishes
Arnie Pye: What made you think that would be a good idea, Brockman!? The new copter went out of control and I was dangling helplessly underneath the entire time!
Kent Brockman: Yes, it was hilarious! We’re going to run footage of it for a story tonight at eleven.

Comic Book Guy: This local-news-helicopter-failfootageis internet viral gold. I must be the first to post it. But it will take four hours to upload. I’ll use that time to do something productive. Like ride my “large man scooter” to Gulp ‘N’ Blow!
Make Comic Book Guy Eat at Gulp ‘N’ Blow (1hr)
Keep Kent Brockman free as he finishes

Arnie Pye in the Sky Pt. 5
After tapping Brockman

Kent: Pye?! You’re not allowed to sit in my anchor chair! It requires that you look Anderson Cooper-distinguished or better.
Arnie: Oh, Kent, I’m so sorry – you didn’t hear? My internet clip went viral. It had more viewers that your show has had in twenty years.
Kent: But that would mean… twenty-five thousand people?
Arnie: Try twenty-five million people. I’m a sensation. Bobby Moynihan played me in a sketch on SNL! Who’s played you on SNL, Kent?
Kent: Nobody yet. But I’ve always thought Alec Baldwin has the right mixture of gravitas and looks to lampoon me properly.
Arnie: Pfft, he’s not even a regular! So there’s no way your parody could be a recurring character. That dream’s as dead as your anchor job.
Make Arnie Pye Take Over as News Anchor (4hrs)
Keep Brockman Free as he finishes
Comic Book Guy: When he’s not hilariously dangling from a helicopter, Arnie Pye is as boring as the drill in the movie ‘Armaggedon.’ Actually, that drill bored into the asteroid quite effectively. Which was preposterous! Besides, Arnie Pye’s viral video is three days old now… which by internet standard means it’s over. Dead. As dead as Bruce Willis in ‘Armageddon’. Spoiler alert. Oh please, you were never going to see it.

Arnie Pye: What?! I’m being replaced as anchor?
Kent Brockman: Too bad, Pye. It turns old people only like you when you’re making an idiot out of yourself.
Kent: But the good news is… there’s a giraffe loose on the Ogdenville Highway. Time to rev those rotors!
Arnie: *sigh*
Make Brockman Record Eye on Springfield (12hrs)
Make Arnie Pye Do a Traffic Report (12hrs)

That’s it, you’ve completed the Arnie Pye  quest.  Hope you enjoyed it as much as I did!
Happy Tapping!

This entry was posted in Characters, Donuts, Tapped Out, Tips and Tricks and tagged Arnie Pye, level 33 premium, Tapped Out walkthroughs. Bookmark the permalink.