I Prefer A Dirty House

Every think what it would be like to not have to pick up after everyone in the house, make meals, do laundry, dust, vacuum….on n on n on n on? WELL I DO SO SHOOSH IT!!! It can’t be THAT bad to have someone else do it all for you, right? WRONG! For just 4,000 GOO it could all be yours.

Treehouse of Horror XII brings us another fun item. The Ultrahouse 3000 (House of Whacks)

While doing her chores, Marge hears a knock at the door. She is greeted by a robot salesman. She tries to close the door on him, but he uses his mechanical leg to prop it open. He presents her with the brochure for the Ultrahouse 3000, which promises quite a nice thing for those stuck doing chores all the time.

Once it is installed, Marge realizes she doesn’t like the way the house computer voice sounds and changes it. She picks 007, Pierce Brosnan. “He was in Remington Steele, right?” (Other options were Mathew Perry and Dennis Miller… ***shudder***).

Seems like a pretty nice house. Big TV, always clean, food prepared for you of your favorites (by analyzing your “leavings”), checking Homer’s blood alcohol level and continuing to serve him beers.

However, the system seems a lil TOO attached to Marge.

Homer makes the mistake of stating. “We’re married til death do us part…If I die she’d be completely free…for man or machine.” It tries to lure Homer to his death. One instance is by cooking bacon…Mmmmmmmmmmmmmm bacon…then placing ice cubes all over kitchen floor. Homer slips and ends up on the table…a table that shreds everything within the center. 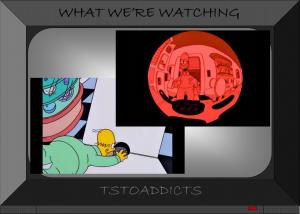 D’OH!!! He survives…minus a lil skull in the back of his head. 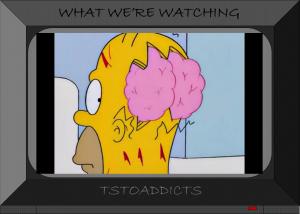 Still determined, the house tries to “take care of him.” Fortunately, Lisa knows they need to disable the central processor. Homer succeeds in removing its circuits. 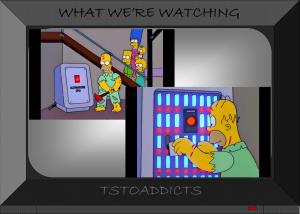 Marge and Lisa feel bad to just toss it out in the trash. Such a waist. They want to give him to someone who could use a man around the house, even though he is slightly homicidal. Who is the perfect person? Patty & Selma of course. LOL. They keep his Self-Destruct button in a place he won’t dare go… 🙂 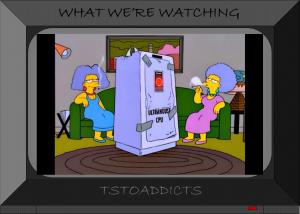 I think I could put up with a homicidal maniac to have a clean kept house. I mean, I deal with me everyday…could be worse. 🙂

This entry was posted in Buildings and tagged addicts, bunny, GOO, Halloween 2013, Halloween Event, simspons tapped out, TSTO, ultrahouse 3000, where did that come from. Bookmark the permalink.

2 responses to “I Prefer A Dirty House”