“Where Did THAT Come From?”- Strongman Homer

Anyone else catch the new episode of Treehouse of Horror? It was AMAZING as usual. I really do like the twisted and dark mind set of Guillermo del Toro. Speaks to all those OTHER voices in my head. (Shhhhh. Don’t say that too loud. You’ll wake up the others.) If you did, you would’ve been able to see just exactly where that Strongman Homer costume came from we all were earning from this years Halloween Event. Not to mention why on earth we needed an Emerald Ring to unlock it. On to the next episode of “Where did THAT come from?”

In the last part of Treehouse of Horror XXIV (Freaks and Geeks), we are taken back in time to a good old fashioned tent circus. The Burnsum and Bailey Circus.

Of course it is full of all the Freaks and Geeks your heart can desire. One of those Freaks is Homer, as the Strongman.

He has quite the powerful tongue. Lol

Marge is his love interest…as he tells her in a forceful way. (Homer in charge? Odd. Really Odd.)

Moe is in love with Marge too, so much so he even wants to give her his precious family Heirloom…an Emerald Ring.

Homer wants the ring. Poor Barney overheard and paid the price. (Where did that ravine end?) He had thought out how will kill Moe after the wedding, so he can have Marge, then kill her, then have the ring to himself. (There’s the Homer I am used to. Just not a bright idea.)

As he is sulking away in the rain, the circus folk have another idea what they want to do with Homer. “ONE OF US! Gooble Goo!” (What DOES that mean? Anyone?) They already hung Burnsum (is THAT were the skeleton in the tree came from?)

And that is “How I met your Mother”… per Homer. Lol

So there you have it. Strongman Homer. A cool costume with a new set of tasks. FOR FREE! 🙂

Here’s a look at the tasks: 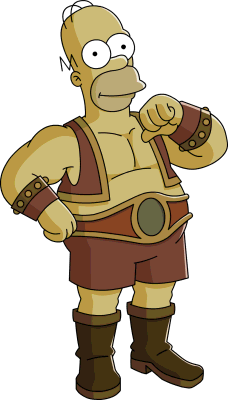 All original art and content © Up All Night, LLC and TSTOAddicts.com All Screen Shots of Game Graphics & Dialogue and Game Graphics from files ™ and © EA, Gracie Films and FOX. The Simpsons ™ and © FOX and its related entities. All rights reserved.

This entry was posted in Characters, Where Did THAT Come From and tagged attic prize, barnsum and bailey circus, bunny, Emerald Ring, freaks and geeks, Halloween 2013, simpsons tapped out, Strongman Homer, treehouse of horror, TSTO Addicts. Bookmark the permalink.

3 responses to ““Where Did THAT Come From?”- Strongman Homer”