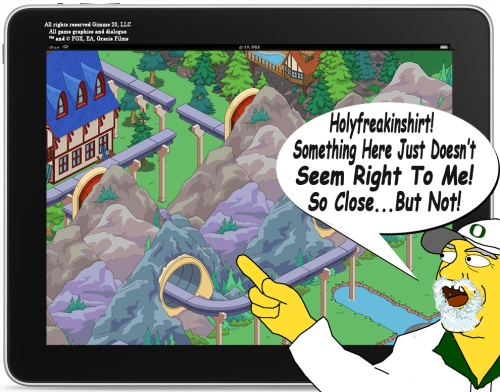 I hesitate to say anything negative about “this wonderful game of ours” for fear of bringing out the “Love It or Leave It” crowd that was a tad bit vocal about my return as  contributor here.  Interestingly enough, I have received a number of emails coaxing me to “stop being so nice” and let my “Cranky” side fly, as they find it more entertaining, and honest.

However…this is Alissa’s place. And Alissa is nice. Very nice. But, admittedly even she wants me to be honest and pragmatic (within the confines of also being nice). Which brings us to the paradox at hand.

First of all, let me state unequivocally, “I love the monorail.”  It is in my less-than-humble-opinion, the best addition to the game, ever.  There are lovers and haters of the monorail. I am a lover, and really don’t understand the haters. But, that is the way it is in the world with most things. I am not a fan of chocolate ice cream. I don’t hate it, but it is waaaaaaaay down on my list of favorite flavors. So, when someone says “I love chocolate ice cream” I mostly just smile, while I order my cone of “Apple Pie Caramel Crunch.”  No harm. No foul.

However, I am pretty sure that both camps would agree, that if you ordered an ice cream cone, and the server placed the scoops just off to the side of the cone, barely out of reach of your ability to reach it with your tongue, and you just couldn’t get to the satisfaction that is so close you can almost taste it…but can’t…that you’d be pretty torqued off. It might become so frustrating, that you just say, “Forget this!! It’s too much trouble! I’ll just have a cookie! Who needs ice cream?”

And so it is with the monorail and the addition of the tunnels to the game which almost…but not quite…allow us to connect our monorails in Springfield proper and Springfield Heights easily.

Take a look…you’ll see what I mean. You might want to grab a couple of cookies and your favorite beverage…it is going to require you to have something sweet at the ready, as I may go a tad “un-sweet” in my description.
END_OF_DOCUMENT_TOKEN_TO_BE_REPLACED

Posted in Monorail, Tapped Out, Troubleshooting 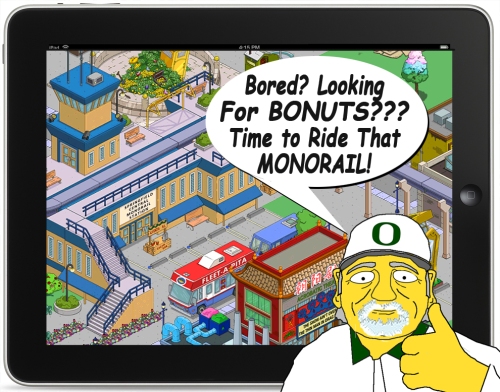 I think it would be safe to say that I am in the latter camp.

From the earliest days of my youth, back in a time when you had to make your own toy building blocks out of the tree that you had to cut yourself, after walking nine miles barefoot into the woods, I have enjoyed building things. It would be accurate that the “building things” and designing, and redesigning, and tweaking your design, is the very reason I tap.

Yes. I love the Simpsons. Yes. I like the dialogue. Yes. I think Maggie is “oh, so, cute!”  But, the real reason I play, is that TSTO gives us so many ways to build, and decorate, and create. This aspect of my personality came out early in life when I began model railroading.

I’ll let that settle in.

Yes. This CrankyOldGuy has boxes of HO track, rolling stock, and buildings, ready to set up at a grandchild’s notice. I like building things…and then watching them run.

Which is why the MONORAIL IS THE BEST UPDATE TO EVER… Oh. Wait. We already covered that bit.

But, even for those of you who are less than enthusiastic about grinding for track, there is a HUGE reward!!

Posted in Addicts How-To, Tapped Out

UPDATE 3:30pm EDT: There’s an update in the App Markets (I can confirm it’s both on Android and iOS…Kindle I’m assuming it’s there for you too).  This most likely is the patch MANY of you have been waiting for.  So download the update and see if it helps resolve your issues…

So we’ve been fielding hundreds of comments over the last 19hrs or so about bugs you’re experiencing in your game, if it’s safe to download the update and a bunch of other stuff all related to the Monorail Event Removal update.  So I figured one central place for all the answers we have for your common questions…and a place for you to list your issues is best for everyone.  (especially since I can’t drink caffeine and I have a small child kicking my insides all night…so needless to say my energy level isn’t as high as it used to be 😉 )

So on with the problems…

END_OF_DOCUMENT_TOKEN_TO_BE_REPLACED

Monorail Removal is Live (for ALL devices..and SAFE to download)

Update Bunny 10:15PM EDT: Seeing many reports from ONLY iOS users that they are crashing. All I can suggest is same… report it to EA and wait.

Update 4:30pm EDT: Seeing reports from several of you about your Rail Yard not paying out the tracks it’s supposed to.  You’ve earned enough points but it doesn’t reward them.  If this is happening to you…go to Krustyland and back to Springfield.  It will resolve itself.

Update 3pm EDT: Android users you are SAFE to download the update.  I just tested it out, had zero issues.  Level 57 is there, as is my questline progress.

iOS users, a patch did come through so players are no longer losing Level 57 buildings (if you’ve lost them, hard close and restart your game).  I can’t give you the “all clear” on it because I don’t have my iOS device with me right now, but based on reader comments it is safe to download now.

Kindle, it’s out for your platform.  I’m guessing it’s safe, as it’s safe for Android.  But I don’t have a Kindle so I couldn’t tell you for sure.  If anyone in the community on a Kindle wants to test it out and let me know I’ll report it here.  Thanks 🙂 Update: Several players have reported Kindle works just fine.

Update 2:30pm EDT: Update has hit Android now…I’m hoping all is resolved with the level 57 issue or it’s not impacting Android.  I’m going to “brave” it and test it now on my phone…I’ll report back here once I see if it works or not.

For iOS users: Other players are reporting that if you hard close and restart TSTO (if you’ve already downloaded the update) the buildings are restored now.  But they have to play the Level 57 questline over again.
Others are reporting that if they JUST now download the update they don’t lose any level 57 progress…so it may be safe to download now.

WARNING: Do not update to the new version in the App Store.  It will cause all of your Level 57 progress (at least that we know of) to disappear.  Hold off on updating for now if possible.  If you’ve already updated and have lost Level 57 progress (or completely), contact EA immediately.  (they are aware of the issue and are working on a patch, but in my mind it’s always good to contact them for yourself)

Just a quick note to let you know the Monorail Removal Update is now live on iOS.  It’s also out on Android at this time.  It’s also hit Kindle.

So if you want to remove the event download the update from your App Store.  BUT be warned…there’s a bug going around we’re seeing creep into the comments with the download.  It’ll remove some buildings from your game.  So pay attention to what you have in your town and if anything is missing after you download the update contact EA immediately.

Just a quick note to let you know the Monorail Takedown is live in the files.  So what does that mean?  Well it means nothing really at this point, other than we can expect it to hit app stores later today.

Remember this will be an APP STORE UPDATE, so it won’t automatically remove from your game.  If you decide you don’t want to remove the event right away, instead you want to try for that last prize, be sure to TURN OFF AUTOMATIC UPDATES.

-The Takedown update is currently in the files
-We expect it to hit App Stores today between 12pm-2pm.
-If you don’t want to remove the event just yet, make sure you turn off your automatic updates.

Once the update hits we’ll be back to let you know what’s changed and what to expect.  Until then keep tap, tap, tapping away…

The Monorail Event should be coming to a close for us at some point today (remember it will take an App Store update to remove, so until that hits you can still collect B&W), but the event awarded us several new trash inspired characters.

END_OF_DOCUMENT_TOKEN_TO_BE_REPLACED

Posted in Characters, Monorail, Tapped Out, Tips and Tricks, Updates

The Monorail Event is winding down and we thought now would be a fun time to take a look back at all the dialogue and jokes of the main questlines that popped up during Monorail Event (we’ll cover the characters in another post).  Especially since I know many of you were excited about the Monorail you may have tapped right through some of the fun! So if you missed any of the dialogue during the 3 Acts here’s your chance to catch it all!

It all starts way back when Garbage was a problem in Springfield and Lyle Lanley shows up with his song and dance….can you remember back that far?  So here we go with Homer, Garbage and Lyle….

END_OF_DOCUMENT_TOKEN_TO_BE_REPLACED

Last Stop for the Monorail

Most likely it will require an App Store update to remove, so it is possible you’ll get a little bit of “borrowed” time to earn more prizes.  But remember if it happens: it’s borrowed time..and the game could force you to update at any time.

REMEMBER…Make sure you unlock the Rail Yard if you want to continue earning Track AFTER the Event ends.  Also, be sure to unlock ALL of the Recycling Depots (Metal, Plastic & Glass) so you’ll be able to earn even after the event is over.  For details on the Rail Yard check out this post and for details about unlocking the Glass Depot (if you haven’t already) check out this post. 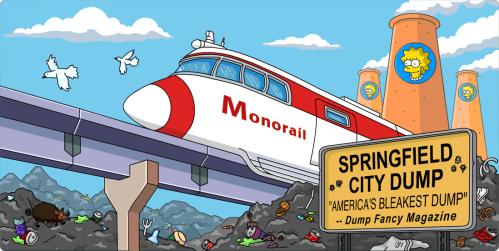 END_OF_DOCUMENT_TOKEN_TO_BE_REPLACED

Update: A couple of tips from other players about what might resolve the issue:
-Hard Close and restart.  Took me several attempts at this one but after hard closing and restarting several times it doesn’t crash anymore.
-If you have another device try loggin in from that device and see if it resolves the issue on both ends.

If you’re still crashing and none of those methods worked for you, contact EA.

Popping in with a quick alert about a bug that just started popping up in TSTO this afternoon…and it relates to crashing.

These were all working earlier this morning, so this is something that just started happening in the last 2hrs or so.

The best thing I can tell you to do right now is Contact EA if you’re experiencing the issue.  They need to be flooded with tickets about this so it can be fixed ASAP.  So don’t hesitate…contact them immediately about it:

Beyond contacting EA, just sit tight and hope it gets fixed soon.  It is impacting nearly everyone…so know you’re not alone.  But remember the more people that contact EA and report the problem, the quicker they’ll be to resolve it. 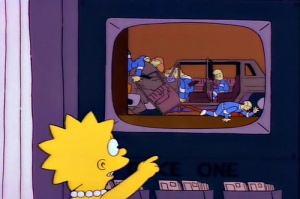 It’s Monorail time in Springfield!  Yes, the Monorail is now in Springfield….as well as a whole lotta garbage.  So what are we doing with all that junk?  Well the one and only Sebastian Cobb is using it to create parts for the Monorail!  (talk about the ultimate recycling..)

Sebastian Cobb is the final character you can earn during the Monorail Event.  He comes to us via the final Act 3 prize.  And once unlocked he comes with his own questline.  For those of you that have earned him already let’s take a look at his short questline now…